6th Grand Pacific Open
April 22 - 25, 2011
Sponsored by Victoria Chess
A new undertaking for Goddesschess, we provided a modest prize fund this year for chess femmes playing in the Open.  Congratulations to WGM Nino Maisuradze for winning the Open with a perfect score of 6.0/6 - the first player to ever do this.

Here is a report from the organizers:

Well, the dust has settled on the 5th annual Grand Pacific Open. A record attendence was set (again!) at 104 players in the main event. We drew players from Europe, across the US, and across Canada. Something like 20+% of the players were out of province (and 80% not from Victoria). The tournament attracted it's first GM and WGM (the eventual winner) as well as a selection of national (and world) and provincial junior champions.

Side events at the GPO (free for participants in the main event) were again popular and included a scholastic event, active tournament, blitz, and bughouse (or double chess).

As always, the event was held at the Hotel Grand Pacific,, a very nice hotel located in Victoria's Inner Harbour next to the BC legislature and across the street from US ferry connections. All equipment was provided and $4250 in guaranteed prizes. Stay tuned for announcements on next year's event - same place, same time (Easter) 2012, same venue.

A big thank you to those to made donations to support the tournament and to our Sponsors:

The main event was convincingly won by WGM Nino Maisuradze with a 6-0 score with wins against most of the highest rated players. Coming in with 5.5 points for second place was Vancouver junior Loren Brigham Laceste who despite his A class rating,, took out a number of masters and experts.

According to Brian Raymer, our contact at Victoria Chess:

The 2011 GPO has come to a close. WGM Nino Maisuradze won the event with a perfect 6-0 score. She becomes the first person to win the GPO with a perfect score.

Chess femmes who participated and their final standings:

Full standings at Monroi, one of the sponsors of this year's Grand Pacific Open.

A couple of photos of the action taken by Julie and Beau Pulfer - I'm not able to identify the players, sorry: 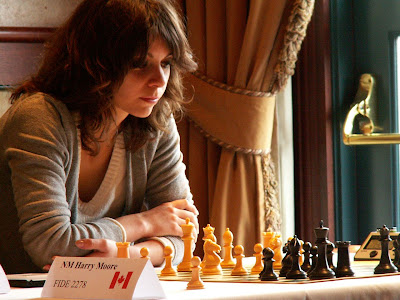 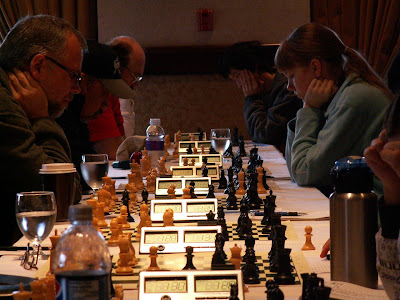