The Winner of the 2011 Goddesschess Fighting Chess Award Is... 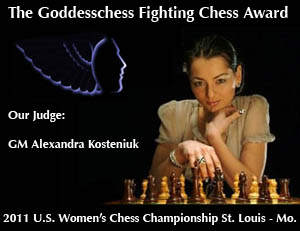 Sabina Foisor!  A full announcement was made at the chess blog of our judge, GM Alexandra Kosteniuk.  Our sincere congratulations to WGM Foisor!

It was a very tough decision this year because so many of the women played tough uncompromising chess and just never gave up, no matter how "doomed" their games seemed to be.  How many times did Krush, Zatonskih and Abrahamyan pull wins out of seemingly lost positions?  It was just amazing to listen to/watch the games this year.  I even took off work yesterday figuring that I would see the end of the women's competition resolved in the two game match between Zatonskih and Abrahamyan.  I should have known better!

I thought I couldn't see anymore excitement in the women's matches than yesterday.  I was wrong.  Today it was even crazier!  I'm surprised I didn't have heart failure listening to these games and trying to catch snatches of the board action while at the office today!  It came down to the final Armageddon game to decide the 2011 Women's Champion.  Congratulations to IM Anna Zatonskih, who must be exhausted and running only on adrenaline at this point, after playing 19 straight games without a break!  I sincerely hope that Tatev Abrahamyan is not too disappointed.  This is the second year in a row she has finished in second place.  She's been knocking at the door.  Perhaps next year she'll bring a war engine to the Women's Championship and blow that damn door to smithereens.

We wish there were more than one Fighting Chess Award but, alas, there is only one.  Therefore, in honor of Irina Krush, who greatly impressed with her five-game winning streak and clear first in the preliminary round-robin part of the Championship, and in honor of the never-say-die spirit exemplified in the chess of Tatev Abrahamyan and Anna Zatonskih throughout the entire championship series, we have donated $100 in each of their names to 9Queens.


Our thanks to our judge, GM Alexandra Kosteniuk, who helped us out despite her busy schedule - indeed, she was playing in tournaments in Russia during most of the U.S. Women's Chess Championship!
Posted by Jan at 7:23 PM