Ancestors of Humans Arose in Asia and Moved to Africa...

Another shot in the ongoing war of where humans arose.  New evidence suggests Dmanisi has concurrent or even older evidence of Homo habitation than Africa. 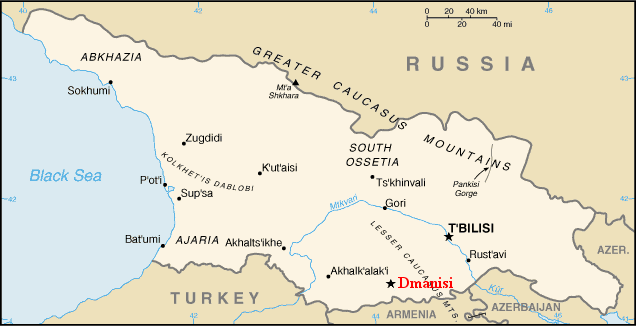 Early members of the genus Homo, possibly direct ancestors of people today, may have evolved in Asia and then gone to Africa, not vice versa as many scientists have assumed.

Most paleoanthropologists have favored an African origin for the potential human ancestor Homo erectus. But new evidence shows the species occupied a West Asian site called Dmanisi from 1.85 million to 1.77 million years ago, at the same time or slightly before the earliest evidence of this humanlike species in Africa, say geologist Reid Ferring of the University of North Texas in Denton and his colleagues.

The new Dmanisi discoveries point to an Asian homeland for H. erectus, the scientists propose online June 6 in the Proceedings of the National Academy of Sciences.

“Dmanisi was occupied repeatedly for roughly 80,000 years and supported a population that was well established and probably quite mobile,” Ferring says.

Evidence remains meager for the geographic origins of the Homo genus, says anthropologist Bernard Wood of George Washington University in Washington, D.C. Several scenarios of Homo evolution are possible, and it’s possible that humankind’s genus got its start in Asia with H. erectus.

Researchers have abandoned the long-standing view that a small-brained hominid from East Africa known as Homo habilis, which first appeared about 2.4 million years ago, evolved into H. erectus. Recent fossil finds showing that the two species coexisted in East Africa for several hundred thousand years have undermined that assumption. Ferring’s team suspects that an as-yet-unidentified African hominid reached Asia before 1.85 million years ago and evolved into H. erectus.

With the new Dmanisi dates, “it certainly looks as though the African origin of H. erectus must be reconsidered,” remarks Harvard University anthropologist Philip Rightmire.

The new Dmanisi discoveries come from just beneath soil that previously yielded 1.77-million-year-old H. erectus fossils, including skulls with surprisingly small brain cases suggestive of an early form of the species (SN: 9/22/07, p. 179). Excavations produced 73 stone tools for cutting and chopping, as well as 34 bone fragments from unidentified creatures. The artifacts came from a series of H. erectus camps at Dmanisi between 1.85 and 1.78 million years ago, the scientists say.

Measurements of reversals in Earth’s magnetic field and of the rate of decay of the element argon in a series of volcanic ash layers provided age estimates for the new finds. [Note the dating techniques being employed.]
Posted by Jan at 10:49 PM