It's another mucky day here. Monday through Wednesday we broke records for heat and humidity, it was awful outside! Wednesday night a cold front came through in an explosive storm with lots of lightning, hail and thunder, and then the rains came. And came, and came.  The storm was fast moving out over Lake Michigan but the rains continued, and lots of lightning but little thunder, very unusual! I always associate the two (thunder/lightning) together. The cold front ushered in cooler temperatures. MUCH cooler. Thursday morning it was 49 degrees F when I woke up, shivering under my sheet, because I had cranked my bedroom windows open and turned off the AC when the cold front came through after the worst of the storm had passed.

Now we're breaking records for LOW temperatures, LOL! Today, more of the same, but the rain has stopped. Supposed to get "sunny" this afternoon (it's already 4:23 p.m. here as I type this) and sunny/warmer tonight with a high of 70F. We'll see. My grass is half a foot tall because of all the rain/fertilizer it's had and needs a cutting!

Right now I've got my living (front) room torn apart rearranging and cleaning supplies are scattered throughout the house as I work on the computer a bit and then clean a bit, etc. Tomorrow the ladies of the investment club will be here for our first meeting in a couple of months so I want the house to be spic and span.

Turning to the news, I was pleased to see that one of Russia's female superstar chessplayers (one of a pair of chessplaying sisters), Nadezhda Kosintseva, has been awarded a GM title by FIDE at the latest meeting of the Presidential Board. All right! Congratulations to GM N. Kosintseva on her well-deserved new title.

When I first started following chess online and then writing about female chessplayers, there were, I believe, eight females who had the coveted GM title. That was in December, 1998. Now there are over twenty female chessplayers with the international GM title. The international GM (grandmaster) title is distinct and higher than the title of international WGM or women's grandmaster; the qualifications to earn a GM title are much tougher to meet. The earliest female players to get the GM title were divided into distinct generations: there were older mostly Russian players who were awarded GM titles by FIDE on the basis of their distinguished careers. Back in the not-so-old-days, women were banned from playing in many of the "higher" tournaments, including the World Chess Championship, where they might have earned GM "norms" (similar to points accrual toward a title) and were generally restricted, either by regulations or tradition and pressure, to playing in women-only events. So, the best female players, who back then were mostly Russian, were stymied from achieving higher ratings and greater glory.

That discrimination was tough to fight against, but fight the women did, beginning with an entirely new generation of talented and fearless non-Russian players like Susan Polgar and Judith Polgar, Pia Cramling, and Xie Jun of China who kow-towed to no one and no silly traditions. As a result of these uncompromising female players, FIDE ever-so-slowly began to creep into the late 20th century! GM titles were awarded to deserving female players of the older generation who had been denied the chance to earn them on their own because of sexual discrimination, and titles were earned by younger players the traditional way -- by meeting the tough requirements! Susan Polgar was the first to do this; shortly after SP earned her GM title, her sister Judit earned her own GM title, and then Pia Cramling of Sweden earned her GM title.

Those three female players unleashed something of a flood thereafter in female players rising through the ranks -- but GM Susan Polgar was still denied the right to compete in the World Chess Championship cycle in 1986, which she had legitimately qualified to do. It had been, theretofore, an exclusively male domain and FIDE seemed determined to keep it so.

However, not even FIDE could not resist the bad publicity that ensued in the age of Women's Liberation and Women's Rights and when the Iron Curtain finally came crashing down, FIDE bowed to international pressure. The NON-WRITTEN FIDE "rule" barring a female from competing in the World Chess Championship cycle was put to death once and for all time, one hopes, when GM Judit Polgar (Susan's younger sister) became the first woman to compete in the world chess championship cycle. It was, some years later, a pleasure to catch the last game of the quarter-finals in the FIDE World Chess Championship in August, 1999 in Las Vegas where I watched Judit Polgar play against eventual winner of the title, GM Alexander Khalifman of Russia.

Xie Jun g CHN peak rating 2574 1970(Xie Jun was awarded her GM title for winning the Women's World Chess Championship in 1991, prior to Pia Cramling earning her GM title the traditional way via norms, in 1992)

That makes 25 female GMs (versus a couple thousand male GMs) - hope I didn't miss anyone!  Just to show how much progress has been by female chessplayers achieving the GM title and progressing in the ranks of players world-wide, the 12th Women's Chess Champion, GM Alexandra Kosteniuk, earned her GM title in 2004. She was, at that time, the 10th woman to do so!  Fifteen more female chessplayers have earned the GM title in the seven years since then.  I salute you all!  You are all heroines to me.

I compiled the information for this post from FIDE records (list of top 100 currently active female chessplayers), Wikipedia (list of female GM title holders) and this 2005 article from the New York Daily News Online:

German Women's Chess Championship
The 2011 German Women's Chess Championship was held in conjunction with the "open" German Chess Championship 26 May - 4 June, 2011.  Another cheater was discovered in the "open" Championship, who used the simple expedient of going to the bathroom and checking his position on a chess program on his smart phone. Now everyone is once again up in arms about rampant cheating in chess.  You know what, just ban cell phones, etc. from being accessed at all during tournament play. What's the big deal about doing so?  If someone cannot wait until the very end of a game to use their damn cell phone, that person should not be playing, period!  Cell phones should be checked in and stored (similar to a coat-check) until the end of the game.  All liability on the part of the player in case a phone is lost or stolen.  End of story!  People, this is not that difficult to implement.  If players don't like it, they can go suck eggs and stop playing.  Stop the cheating via electronic devices.  All tournament results are now automatically rendered suspect because of the ability of players to use this form of technology to cheat. One cheating player taints all the other players who don't cheat. This sucks!

Here are the women's final standings: 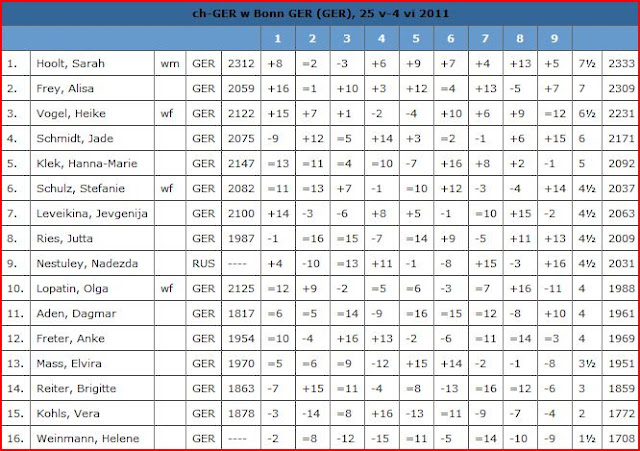 The Championships of Uzbekistan Major League (I'm assuming this was a final qualifier for the main event) took place 21st-31st May 2011. Both men's and women's events had 11 player all-play-alls.  Information from The Week in Chess: 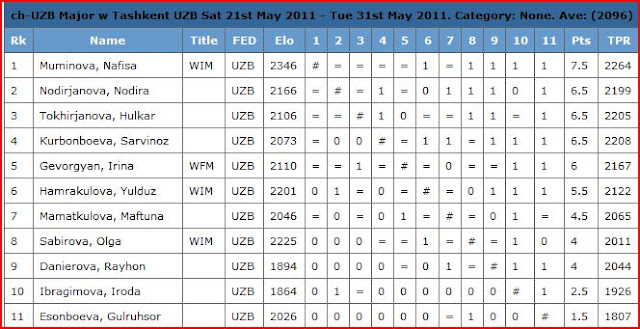 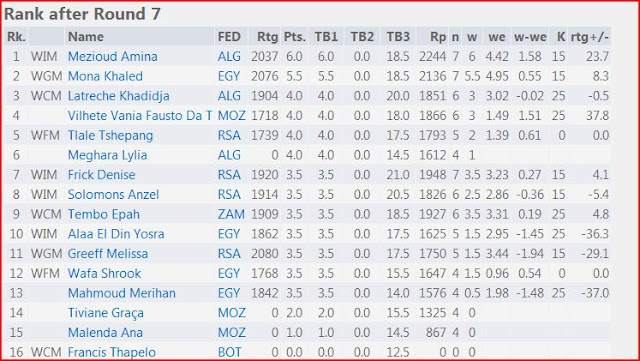