Beautiful Example of Pre-Hispanic Textile from the Inca Empire 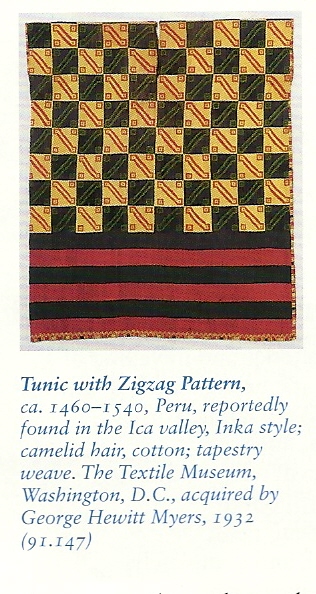 This portion of an "Andean tunic, one of several on display currently at the Met (The Andean Tunic, 400 BCE - 1800 CE, through September 18, 2011, The Michael C. Rockefeller Wing, AAOA Special Exhibition Gallery, 1st Floor) was depicted in an overview of the exhibit in the 2011 Summer Members Catalog. (I scanned the image from the Catalog).  As it was created prior to the Incas' exposure to European invaders, it cannot be said to be a "copy" or "imitation" of a European checkerboard!

I've got a few other examples of South American "checkerboard" patterned textiles from before the Spanish invasion, they are saved on another computer.  I should dig them out of my image archives!

Did the checkerboard pattern come over with humans when they moved to the New World (therefore dating to, perhaps, the time of the settlement of people at Monte Verde, Chile some 13,500 years ago, or perhaps some 32,000 years ago, if the dating of the rock shelter at Pedra Furada, Brazil is accepted as authentic)?  Or, was it independently invented by textile weavers, perhaps by several textile weavers, scattered all around North, Central and South America, at some later dates?  And if so, when?

This is a subject that continues to fascinate me.  It can't come soon enough - my retirement!  Then, assuming I'm still alive and kicking, I'll have time to explore subjects like this in depth.  I've a whole list of them...
Posted by Jan at 3:00 PM