Florence and Herbert Irving Galleries for the Arts of South and Southeast Asia, 3rd Floor
The image was scanned from the Summer 2011 Members Calendar 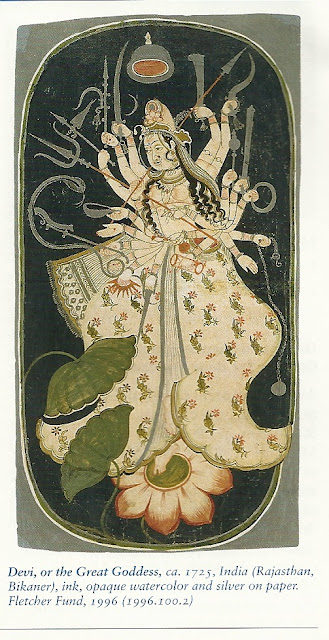 Devi, the Indian goddess, is the omnipresent embodiment of power and wisdom given expression in all of India's ancient religions. From the beginnings of figurative representation in early India, she has been the frequent subject of sculpture and a favored subject in later devotional painting. Mother India: The Goddess in Indian Painting, to be presented at The Metropolitan Museum of Art from June 29 through November 27, 2011, will feature 30 works from the Museum's collection that depict Devi in all her various aspects. Perhaps the most widely worshipped deity in all India, Devi stands alongside Shiva and Vishnu in the first rank of the Hindu, Buddhist, and Jain pantheons.

The exhibition will present enduring images of the feminine in Indian art from the first millennium BCE through the late 20th century. Devi in her myriad forms—benign, maternal, empowering, and fearsome—expresses the range of human emotions. Later Indian paintings, such as Devi, or the Great Goddess, from 18th-century Bikaner, Rajasthan, show her assuming the form of Durga, displaying the cosmic weapons lent to her by the male gods but standing on lotus flowers, rather than slaying the customary buffalo demon. Saraswati, the benign patron of the arts and learning is represented in a mid-20th-century painting by the artist Srimati.

Sculptural forms range from proto-historic goddess figurines to medieval Durgas of awesome ferocity. These will include rare, early molded clay images of the goddess, such as Goddess with attendants, from Chanduketugarh, in Bengal, dated to the Shunga Period (circa first century BCE). Also on display will be the beautiful 12th-century bronze Yasoda nursing the infant Krishna, from Tamil Nadu, an enduring image of maternal love and very likely a royal commission for use in a private chapel.

Mother India: The Goddess in Indian Painting is organized by John Guy, Florence and Herbert Irving Curator of South and Southeast Asian Art, and Kurt Behrendt, Assistant Curator, in the Metropolitan Museum's Department of Asian Art.

In conjunction with the exhibition, the Museum will offer gallery talks that are free with Museum admission.

The exhibition will be featured on the Museum's website at www.metmuseum.org.
Posted by Jan at 1:47 PM