Day at the Museum!

The Cleopatra exhibit at the Milwaukee Public Museum was fantastic!  Unfortunately, we were not allowed to take photographs, but in my opinion the exhibit lived up to all its positive press coverage!

Cleopatra, the Search for the Last Queen of Egypt
October 8, 2011

We arrived at the Milwaukee Public Museum for a 10:30 a.m. entry to the exhibit.  The entries are timed at 15-minute intervals.  I had a nice chat with the ticket-taker who told me that she thought the crowds since the start of the exhibit had been record-breaking attendance wise for Milwaukee exhibits, except for that morning, when it was rather quiet.  However, by the time Mr. Don and I exited the exhibit about 2.5 hours later, the museum was JUMPING!

We had a quick lunch and then toured the third floor; took a break and toured the second floor.  I was too tired to tour the first floor and by the time we left it was already about 5 p.m., and we had to wait awhile for a bus.  As we have toured the museum together a couple of times before, we concentrated on exhibits that caught our particular attention.

No photos from the Cleo exhibit - the rules prohibited taking it and there were plenty of "enforcers" stationed throughout the exhibit to make sure that anyone caught taking photographs was ushered out pronto -- not sure if the offending cell phone or camera would have been confiscated.  As far as I ccould tell, he people in the Milwaukee exhibit were very well mannered.  Many people, including an ecstatic Mr. Don, came VERY close to touching some exhibits (daringly left out of glass cases, all the better to be able to get one's nose up close to see details), as did many other people I saw, but no one did -- at least, I didn't catch anyone doing it, not even any of the kids that were in the exhibit (and there were plenty of them around, especially as we moved toward the noon hour and after).

We got plenty of photos from the rest of the museum, though!  I have to show you this one Mr. Don took of me -- he is sooooo sentimental sometimes :)  It's at the same recreation of a head from Easter Island where he took a photograph of me in -- we think about 2006??? -- we agree that it had to be winter because I was wearing a fleece shirt that I would never have worn during the summer.

﻿ This figure (and the one below, only partially shown), are from the Lake Titicaca area in Peru; they are very early (early centuries CE) but neither Mr. Don nor I remember the exact date range -- and we didn't take notes.  What struck both of us is the amazing resemblance between these two masks? headdresses?-- whatever they are --  to CHINESE "dragon" iconography!  How could that possibly be, when according to traditional theory there could not possibly have been any contact between the indigenous peoples of Peru of the 1st century CE with ANY people from the Old World? 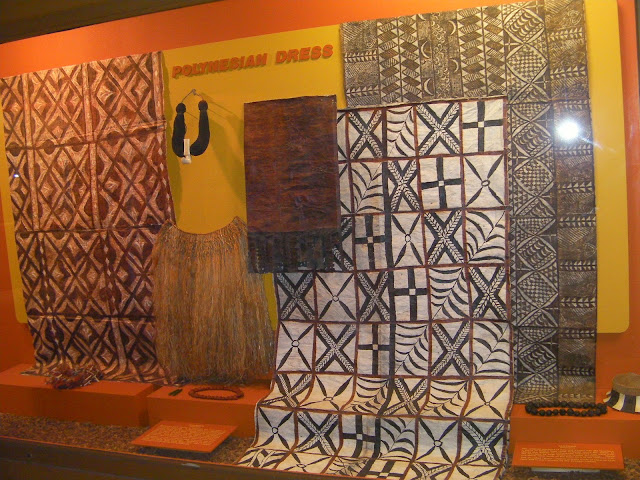 Great photograph by Mr. Don of an assembly of early Polynesian fabrics.  The geometric patterns are so beautiful - and ubiquitous. 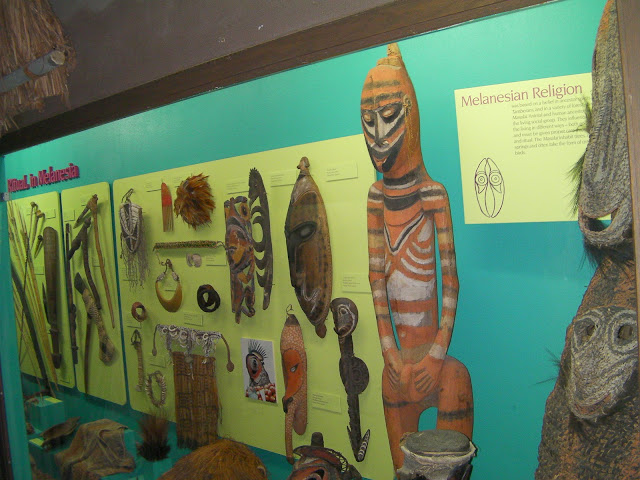