For whatever reason, Mr. Don continues to call the Museo Prado the "Prada" and has asked for directions to the "Prada" from a police officer, amongst others innocent standers-by because he does not believe me when I say "it is in this direction."  Actually, he doesn't believe anything I say, that is - when he listens at all.

Take a look on this map and click on the Prado Museum - that will give you a rough idea of where we are staying in Madrid this trip - our Hostal Gonzalo is just a few blocks (unfortunately, all up-hill) from the beginning of the grounds to the Prado Museum, just across the Paseo del Prado to the left, on Calle de Cervantes.  We are very close to the Starbucks that faces the Fountain of Jupiter.

Now, please click on "City Walls."  That is where we were earlier today - but not for long.  Mr. Don wanted to see the Palace area again, and also the Temple De Bod.  We inspected the ancient Arab city wall excavations near the edge of what I call "The Escarpment" (sort of like the area where Tarzan and Jane lived back in Africa in the 1940's) that we stumbled upon quite by chance, took photos of the magnificent Almundena Cathedral (clickable on the map), and walked past the Royal Palace (also clickable) and the gardens across from the Esplanade, where lots of Policia were buzzing around and ordering people not to cross here or there (including me), and on to the park that houses the lovely Temple of De Bod (clickable), before circling back and landing at the Plaza de Espana (also clickable) where the statute dedicated to Cervantes and Don Quixote stands -- unfortunately inaccessible due to construction/renovations (?).

We left the hotel about 9:30 a.m. to get breakfast -- Big Macs and fries at McDonalds near the Atocha Station because, Mr. Don decreed, the little cafe we had a perfectly adequate breakfast at yesterday wasn't good enough for him.  We stopped briefly back at our hotel before heading out about 10:30 a.m. to go see what Mr. Don wanted to see because, Mr. Don decreed, he wanted to see some things in the Guide Book I had oh so inconsiderately left back at my hotel room.  In fact, today we saw everything that Mr. Don wanted to see, and Mr. Don ate and drank what Mr. Don wanted to eat and drink.  Mr. Don rested when he wanted to rest.  Mr. Don took the videos and photographs he wanted and also ordered me to take certain photographs that he did not feel like taking because he did not want to wear out his batteries.  I also lugged Mr. Don's video cam in my purse because Mr. Don did not want to be inconvenienced with his back-pack today, and he had too much of a burden carrying his cigarettes and lighter.

We arrived back at the hotel exhausted, shortly before 5:00 p.m.  I stopped on the way back at the little corner grocer just two blocks away and picked up a bottle of wine for 2.99 euros - one of the cheapest things to buy in Madrid.  I think I need another bottle of cheap Madrid wine, actually.  Maybe three more, actually.

Mr. Don is sleeping, although right now furniture is being moved overhead and lots of pounding and shouting is taking place overhead and underneath us in the premises in which our Hostal is situated.  In fact, it has been taking place since shortly after Mr. Don retired to go take a nap from which, no doubt, he will arise bright eyed and bushy-tailed around 11:00 p.m. and expect me to accompany him on a round on nightlife in the City.  Guess again, Dude.

I have made sure to flush my toilet several times.  Mr. Don's room is separated from mine partially by a closet holding cleaning supplies for the hotel owners, but our bathrooms share a wall that has no sound-proofing in it.  I can hear him when he pees and he can, no doubt, hear when I pee, too.  I hope he hears me pee out a lot of cheap Madrid vino tonight.

Here are some of my absolutely beautiful photographs taken during "Mr. Don's Forced March Tour of Madrid" today: 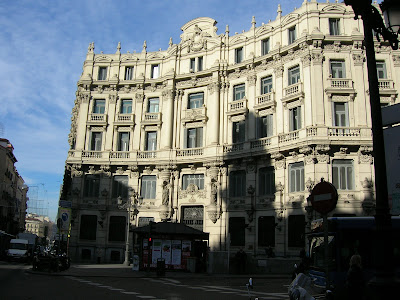 A study in sun and shadow.  A building seen while marching walking down Calle de Acala earlier today. 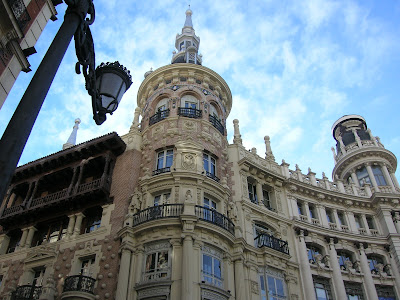 Beautiful buildings and plazas abound in Old (central) Madrid.  We came across a small round plaza and I took several photographs of the buildings - there were at least five calles (streets, although to be fair, many of them are single-file one-way traffic "lanes" -- like alleys -- rather than streets as we know them in the states).  We left the Calle de Atocha and walked down -- not sure -- but eventually we ended up walking down Calle de Mayor. 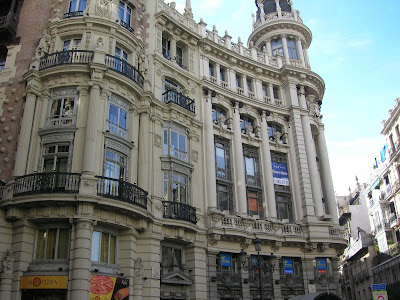 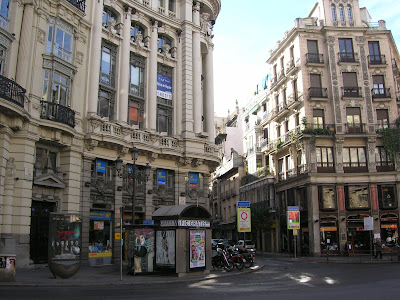 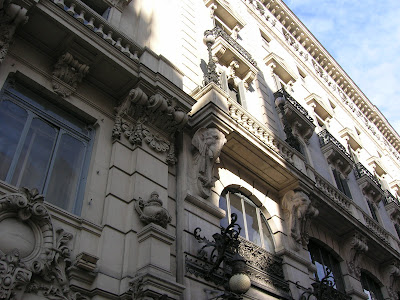 I don't know if you can see them, but yes, those are elephants' heads acting as korbels on this great Bank of Spain building!  Doesn't the detailing on this facade just take your breath away?  It sure did mine.  I'm glad to have finally got some photographs of it on my own. 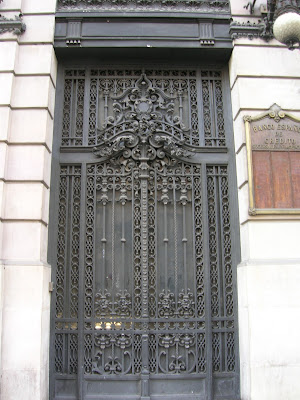 The barred doors of the main entry to this particular branch of the Bank of Spain, in all of their wrought-iron glory!  Today, being a national holiday in Spain, all banks and public buildings were closed.  I tried to get the sign in the photo just to the right of the doors.  These doors are probably - 30 feet tall???  And wider than I am tall (5' 3-3/4" -- I'm proud of that extra 3/4s of an inch). 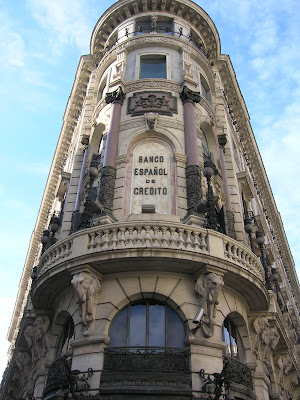 Another view of the magnificent facade of this particular branch (above the main barred doors) of the Bank of Spain.  Just in case you didn't know it - I tried to get the photo of the name of banlk in this photo).  This "branch" is the Banco Espanol de Credito.  Oh oh, guess this particular branch hasn't done very well, has it... 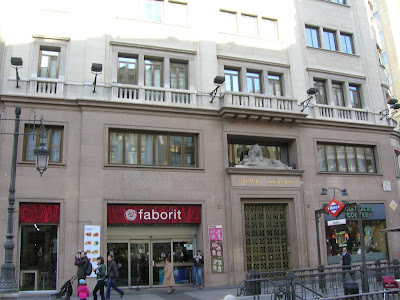 If you look very very closely, you will just make out the recumbant lion above the main door to this building, which is kitty-corner from the Bank of Spain (Credit Branch) just across the way.  Har - kitty-corner, get it? Another one of the innumerable formerly royal palaces that has been turned into a museum.  I don't remember what this one is called.  Mr. Don marched me past it on our way down the Calle de Acala (I think - after a certain point I just zoned out and went into "endure" mode).  It sure was a pretty place, I remember that.  The proportiions were lovely, even though closed in on both sides by other buildings.  I think it houses a collection of fine art now.  Sorry, I don't know it's name. 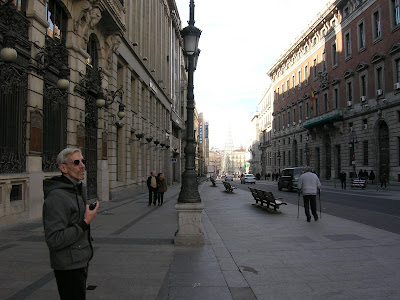 Continuing our march toward Plaza del Sol (seen in the faint distance).  There he is, the Evil One.
No, not the guy on the crutches.  Look at the guy holding the mini video cam.