Armenian WGM Tatev Abrahamyan scored 4,5 points out of 5 and solely took the first prize at the open that was held in Woodlands Hills, USA.  41 chess players were taking part in the tournament. Armchess.am informs about this.

The Armenian woman chess player is the winner of the Woodland Hills chess tournament
21:55, 24 July, 2012
Yerevan, July 24, ARMENPRESS: The American Armenian Grandmaster Tatev Abrahamyan scoring 7.5 points out of 9 possible became the winner of the international chess tournament held in the United States Woodland Hills. As “Armenpress” reports Abrahamyan is one of the US most popular chess players. She played in the country’s women’s national chess team for many times. 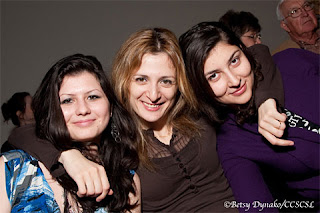 Here is a file photo I have of Tatev Abrahamyan.  Tatev is on the right - I want those cheekbones.  This photo was taken by Betsy Dynako at the 2009 U.S. Women's Chess Championship in St. Louis, Missouri.  Also shown are Alisa Melekhina, left, and Rusudan Goletiani, center.  Photo from Chessbase (where else do they feature so many photographs of beautiful female chessplayers?)  I think the report is right that she is one of the most popular chessplayers in the U.S.  She has also won the Goddesschess Fighting Chess Award three times while competing in U.S. Women's Chess Championships!
Posted by Jan at 6:44 PM