Possibly of Interest to Collectors: Skyline Chess - London (Needs Funding to Bring to Market - Check It Out)

Hmmm....  I don't know if this set will ever make it to production.  Some collector(s) might want to consider pursuing the prototype, which looks pretty dang cool!

From Realty Today (of all places!)

Remember how a whole island in Japan was turned into the board game "Game of Life"? [Really? I never knew that!] Something similar is happening in London. Recently, a couple of London-based architects decided to combine their passion for the game of chess and architecture and converted the chessboard pieces to resemble the London skyline, literally.
The 3D printed prototype of the game called "Skyline Chess" shows 'hand cast chessmen based on the iconic buildings of London'. The two architects, Chris Posser and Ian Flood, took to KickStarter to fund the project and commercialize the unique chess set. 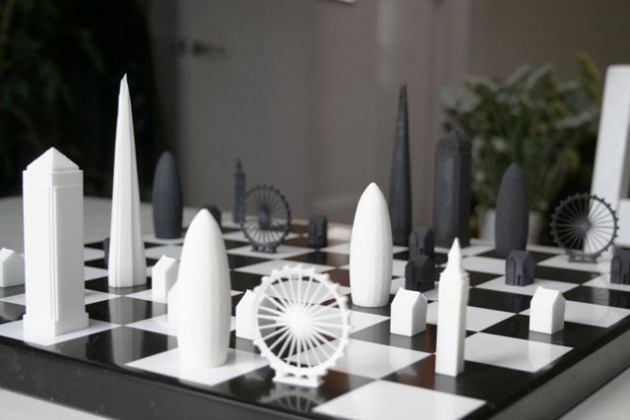 The ambitious designers don't want to stop at London. If the London one does well, they hope to create games where one can play city vs. city, for ex: New York vs. Rome, Dubai vs. Shanghai, etc.

In the Skyline Chess set, each piece of the game will be represented by a famous building of London. While a common two story residence will signify the pawn, the 50 St Mary Axe or the Gherkin will be the bishop (as its shape suits the piece). The knight will be portrayed by the London Eye and the rook by the historic Big Ben. The London Shard will play the queen and the Canary Wharf building will signify the king.

A lot of thought and detail went into developing the pieces. The chessmen were conceptualized over a few games of chess and 'were scaled to best represent the quality of the chosen building'.

Our vision is to take our prototype chess set and bring it to market. We are currently in discussions with manufacturers and we hope to be able to market the sets in a weighted acrylic as well as cast them in metal.

However, this project will only be funded if at least $39,000 is pledged by September 26. You can back the creation to win customized stuff and also get a mention on their website.

There is a video at the article link (title at beginning of post).