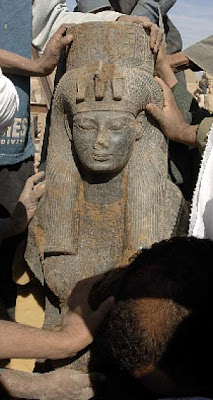 Statue of pharonic queen discovered in south Egypt
(Image: Statue of a queen, probably Tiy, execavated at the Temple of Mut at Luxor, January, 2006. I wonder if this is the same statue?)

LUXOR, Egypt (AFP) - Egyptian and European archeologists on Saturday announced they had discovered a giant statue of an ancient pharaonic queen on the spectacular south Egypt site of the Colossi of Memnon.

It was discovered around the site of the massive Colossi of Memnon twin statues that command the road to Luxor's famed Valley of the Kings.

Two sphinx representing Tiy and Amenhotep III as well as 10 statues in black granite of the lion-headed goddess Sekhmet, who protected the pharaohs, we also found by the archeologists and presented to reporters and senior officials.

Culture Minister Faruq Hosni hailed the discovery as a "formidable" entreprise and told reporters he expected the statues to be erected for public view next year.

They will be joined by two 15-metre-high (50 feet) statues, excavated in recent years, which will be placed 100 metre (yards) behind the Colossi of Memnon as part of an "open air museum."

"Once these new colossi and the other new discoveries are put in place... this site will become one of the most important open air museums of the pharaonic period," the head of the archeological team Hourig Sourouzian said.

The Colossi of Memnom are massive quartzite sandstone statues, some 20 metres high, which used to guard a temple dedicated to Amenhotep III that was destroyed in a devastating earthquake in the 1st century AD.

Over the centuries the rising waters of the Nile River inundated the rest of the site.

Archeologists hope to rehabilitate the site within five years.
Posted by Jan at 5:23 PM