Her nickname is "Indiana Jen." Love it!

Website
Who am I?
I am a Classical Archaeologist currently teaching at Texas Christian University and Tarrant County College NW Campus.

Cult and religion are synonymous for some religious sects within Roman culture, an adjunct anthropology professor told students and faculty Monday.

Lockett said the definition of a cult is veneration, adoration and worship.

The Roman mystery cults, a religious sect of Roman culture with selective membership and without public rituals, were just as important as traditional Roman religions and practices in Roman culture, Lockett said.

Romans were tolerant of other religious traditions when they conquered the East Mediterranean and Asia Minor, Lockett said, allowing cults to coexist without conflict.

She said not only did the unknown allure members, but the offer of a better afterlife attracted many worshipers.

The mystery cults promised a better afterlife, but they were also an easy scapegoat during times of social and political upheaval, Lockett said.

The cults suffered waves of violent suppression throughout history, she said.

Prominent cults, like the Cult of Bacchus, triggered many conspiracy theories to hatch and cause witch hunts. In 186 B.C., 7,000 suspected members of the Cult of Bacchus were hunted and killed because they were deemed dangerous to the state, she said.

Mystery cults still exist, such as the Freemasons, revived and made popular by author Dan Brown, author of "Da Vinci Code," Lockett said.

Now I'm wondering, though, if those crafty Masons 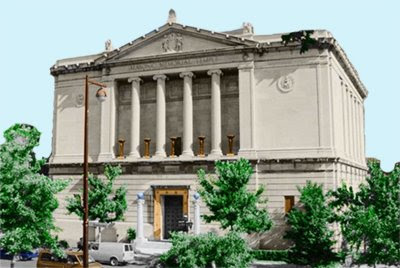 plotted for Dan Brown to write and publish his latest novel(not yet out)that, after The DaVinci Code, is bound to be an instant megahit, as they were looking for new recruits to refresh their frankly heretofore declining ranks. What better way to generate fresh interest and potentially thousands of new recruits than to engineer a new Dan Brown Novel that features the Masons...

By the way, if you ever have a chance, please take a tour of the main Masonic Temple in Montreal, Quebec. It is absolutely magnificent. I saw it together with dondelion (who arranged for a guided tour), Isis and Michelle in late November, 2001. We laid over for a day in Montreal en route to Amsterdam when we attended the 2001 IGK Symposium at the Max Euwe Centrum. Image of the Masonic Memorial Temple from website Grand Lodge of Quebec A.F. & A.M.
It's a beautiful place. You can find lots more images and photo albums of it online.
Posted by Jan at 6:14 PM

I just found this review about a year after giving the talk. Thanks for the comments! Just an FYI, you can download the talk itself via iTunes by checking the following link:

My latest podcast can be found here: