Board Games Benefit from Bad Economy 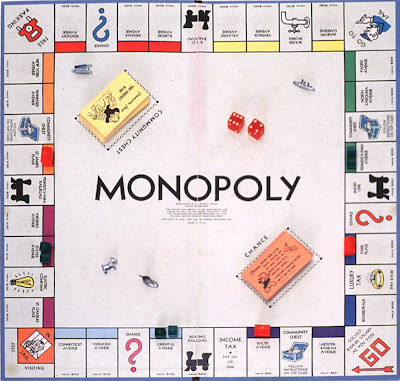 Story from boston.com Downturn could be boon for board-game makers Bloomberg News / February 22, 2009 NEW YORK - Monopoly (image from Online Board Games) gave Americans a cheap way to entertain the family at the height of the Great Depression, and Mattel Inc. and Hasbro Inc. are betting board games will stage a comeback in the current crisis. Mattel and Hasbro unveiled retooled versions of perennial favorites including Candy Land, Trivial Pursuit, and Monopoly at last week's American International Toy Fair. US sales of board games rose 6 percent to $794 million last year, while total toy sales declined 3 percent, according to researcher NPD Group Inc. Game sales have risen since last summer, when dwindling disposable income made the "staycation" a popular alternative to holiday travel, according to Reyne Rice, a consultant at the Toy Industry Association Inc. in New York. "When you buy a $20 game, it can last," Rice said in an interview. "You can pull it out year after year." The worst US unemployment in 16 years and a global recession have trimmed consumer spending, handing both toymakers revenue declines in the fourth quarter of 2008: Retail sales fell each of the last six months of 2008 and climbed 1 percent last month, according to the Commerce Department. "When you get into this type of economy, where the consumer does not have the kind of spendable income that they had previously, they tend to do more things as a family," Neil Friedman, president of Mattel brands, said in a telephone interview. "That tends to be games." Charles B. Darrow of Germantown, Pa., invented the Monopoly real estate game in 1934. Parker Brothers started selling the game in 1935, when the US jobless rate stood at 20 percent. It was the bestselling board game in America that year, according to the website of Hasbro, which now owns Parker Brothers. Mattel has added the $24.99 Apples to Apples to its line of games for families and friends. Puzzle game Blokus goes for $29.99 and UNO Moo!, a preschool version of the card game, will come out in the second half of 2009 for $19.99. "We certainly focused on those family-oriented things a little more than perhaps we would normally have," Friedman said. Hasbro will promote "family game night" for children, parents, and grandparents this year, said Phil Jackson, head of the Pawtucket, R.I., company's game division. "Family game night is probably the single most important thing that we're focusing on in 2009," Jackson said in a telephone interview. "People are staying home more and looking for in-home entertainment more than ever." Hasbro's Candy Land Sweet Celebration comes out in the second half of the year. The new version of the 1949 game lets players adjust their path and collect treats. In Monopoly City, also due in the second half, players buy entire districts and build three-dimensional properties. It will retail for $34.99. Hasbro's fourth-quarter revenue dropped 5.1 percent to $1.23 billion. Board game and puzzles sales rose 2 percent in 2008, according to Patricia Riso, a spokeswoman. "Some people have even said, 'Staying in is the new going out,' " Jackson said. © Copyright 2009 Globe Newspaper Company.
Posted by Jan at 12:28 PM