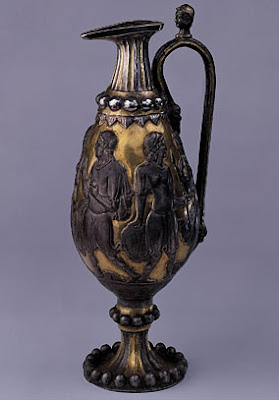 From The International Herald-Tribune Rare treasures from the Silk Road By Alexandra A. Seno Published: February 17, 2009 HONG KONG: Some 2,000 years ago, vibrant global commerce hummed along the trading hubs of the Silk Road. For nearly a millennium, the complex business network spread Buddhism, Christianity and Islam, and helped fine Chinese fabrics become all the rage among the Roman Empire's elite and wealthy Chinese coveting art pieces inspired by Greek legend. The highlights of the deceptively modest exhibit "The Silk Road in Ningxia," which runs at the Hong Kong University Museum and Art Gallery until March 15, hold their own against those in the many big-budget Silk Road productions that appear around the world annually. This year, the Hermitage in St. Petersburg, the National Museum of History in Taipei and Brussels' Royal Museums for Art and History are among those hosting shows devoted to the fabled trading route. The Silk Road stretched from what is now Turkey through Central Asia and China to Africa, Southeast Asia, the subcontinent and the Middle East. Susan Whitfield is a Silk Road historian and the director of the British Library's International Dunhuang Project, a multinational research and archiving effort to broaden knowledge about the Silk Road. She lauds the "Ningxia" exhibit for the exceptional quality of the antiquities and the unique focus of the narrative. She said that "Ningxia" illustrates "a snapshot of a smaller area but a larger cultural diversity." Whitfield recently visited Hong Kong, invited by the museum, to deliver lectures related to the exhibit. Most shows about the Silk Road either attempt to tell the general story of the whole route or draw from frequently studied museum collections in Europe, built on finds primarily from Xinjiang, Gansu or Inner Mongolia, and carted off by British, Russian, French, German and Japanese expeditions in the early 1900s. The 105 objects in Hong Kong come from Ningxia, now a sparsely industrialized Chinese autonomous Muslim region. The area was once the site of multicultural Silk Road trading towns, due to its strategic location next to the Yellow River and its proximity to the ancient capital at Xian and to the trading routes through the steppes. Twenty of the items are listed as first-class national treasures by Beijing. Even the most intrepid explorers, like the archaeologist Aurel Stein, never reached landlocked Ningxia, where Han Chinese lived in close proximity to Buddhist Tanguts and Zoroastrian Sogdians. Since Chinese archaeologists only unearthed sites in Ningxia in the 1980s and 1990s, the discoveries benefited from the modern practice of learning from the context in which objects were discovered, instead of simply taking the finds home to Europe or Japan for study there. "Traditionally, Chinese scholarship has been about research on the history of the Han Chinese, but that has changed," said Yeung Chun-tong, director of the Hong Kong University museum, who led the effort to borrow the artifacts from the Ningxia government. The relatively new archaeological work there represents increased interest in the contributions of ethnic minorities to Chinese culture and a growing field of scholarship on the mainland. In one showcase, a bowl and a gilt silver ewer tell a profound story of globalization. Archaeologists recovered the items in 1983 from the sixth century tomb of Li Xian, a local general. The 8-centimeter-high, or about 3-inch-high, green blown-glass bowl very likely came from the Persians, one of the few civilizations that mastered the technology at the time. The skillfully decorated pitcher features figures from the Greek myth about Helen of Troy [image above]. The piece was probably made in Bactria (in today's Afghanistan), brought to Ningxia by caravan traders with other goods. Another cabinet holds gold and silver coins. Some are distinctly Byzantine, some are copies. They were prestige items in burial sites in Ningxia for prominent Sogdians. These communities lived in China for centuries, controlling pivotal Silk Road businesses, writing in a script derived from Aramaic and following a form of Zoroastrianism adapted from that practiced in Persia. Like the Chinese, these Sogdians placed their dead in tombs instead of leaving them leaving them in Zoroastrian "towers of silence" to be picked apart by birds. The exhibit objects range from an early Ming dynasty Koran to wooden printing blocks and Tang-era stone doors decorated with whirling foreign dancers, offering proof of a sophisticated and complex society. Among the works never before shown outside of the mainland are well-preserved silk panels adorned with frolicking children; they are from the 11th century and usually considered too fragile to transport. "Though we have poor funding, we have the freedom to mount interesting exhibits," said Yeung. The Hong Kong museum, which does not charge an entrance fee, staged "Ningxia" with plenty of goodwill from China and an extremely tight budget. According to Yeung, despite the fact that the museum received free transportation from an art logistics company, it could only spend a maximum of 1 million Hong Kong dollars, or about $128,000, to pay for insurance, borrowing the goods at a steep discount, and installation. Rest of article.
Posted by Jan at 11:57 AM