Oh Jane! Is Nothing Sacred? 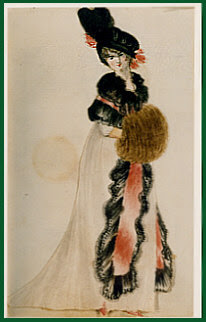 Good Goddess! What next? Lassie goes Cujo??? (Image [not from article]: Alleged portrait of Jane Austen circa 1815). From The New York Times Art Beat February 17, 2009, 11:31 am Austen Meets Alien in ‘Pride and Predator’ By Dave Itzkoff For some viewers, the idea of another Jane Austen-inspired period drama is sufficiently monstrous, but a coming film project seeks to update the formula with actual monsters, Variety reported. The movie “Pride and Predator,” directed by Will Clark and written by Mr. Clark with Andrew Kemble and John Pape, will juxtapose brooding aristocrats with a brutal alien that lands in 1800s-era Britain, attacking residents and leaving them with neither sense nor sensibility. The film, to be produced by Elton John’s Rocket Pictures, is the latest work to mix the hoary costume genre with elements of horror. A book called “Pride and Prejudice and Zombies,” credited to Jane Austen and Seth Grahame-Smith and published by Quirk Books, will combine the Austen novel with “all-new scenes of bone-crunching zombie mayhem.” And a coming novel by Michael Thomas Ford called “Jane Bites Back” depicts the 19th-century author as a frustrated vampire, taking revenge on those who have made money from her work.
Posted by Jan at 11:35 AM