Mommy, Look What I Found... 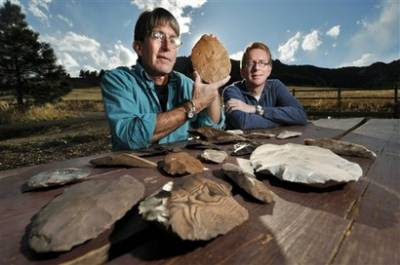 Ohmygoddess! Family discovered 13,000 year old cache of stone-age tools in their front yard! (This photo release by the University of Colorado on Feb. 26, 2009, shows Douglas Bamforth, Anthropology professor for the University of Colorado at Boulder, left, and Patrick Mahaffy, show a portion of more than 80 artfiacts unearthed about two feet below Mahaffy's Boulder's front yard during a landscaping project this past summer. The artifacts, which may have been made during the Clovis period nearly 13,000 years ago, were neatly arranged in a cache near where this portrait was taken, suggesting that the users of these instruments may have intended to reuse them. (AP Photo by Glenn J. Asakawa/University of Colorado) 13,000-year-old tools unearthed at Colorado home By ALYSIA PATTERSON, Associated Press Writer Alysia Patterson, Associated Press Writer – Thu Feb 26, 3:34 pm ET DENVER – Landscapers were digging a hole for a fish pond in the front yard of a Boulder home last May when they heard a "chink" that didn't sound right. Just some lost tools. Some 13,000-year-old lost tools. They had stumbled onto a cache of more than 83 ancient tools buried by the Clovis people — ice age hunter-gatherers who remain a puzzle to anthropologists. The home's owner, Patrick Mahaffy, thought they were only a century or two old before contacting researchers at the University of Colorado-Boulder. "My jaw just dropped," said CU anthropologist Douglas Bamforth, who is leading a study of the find. "Boulder is a densely populated area. And in the midst of all that to find this cache." The cache is one of only a handful of Clovis-age artifacts uncovered in North America, said Bamforth. The tools reveal an unexpected level of sophistication, Bamforth said, describing the design as "unnecessarily complicated," artistic and utilitarian at the same time. What researchers found on the tools also was significant. Biochemical analysis of blood and other protein residue revealed the tools were used to butcher camels, horses, sheep and bears. That proves that the Clovis people ate more than just woolly mammoth meat for dinner, something scientists were unable to confirm before. "A window opens up into this incredibly remote way of life that we normally can't see much of," Bamforth said. The cache was buried 18 inches deep and was packed into a hole the size of a large shoe box. The tools were most likely wrapped in a skin that deteriorated over time, Mahaffy said. "The kind of stone that's present — the kind that flakes to a good sharp edge — isn't widely available in this part of Colorado. It looks like they were storing material because they knew they would need it later," said Bamforth. Bamforth believes the tools had been untouched since the owners placed them there for storage. Mahaffy's Clovis cache is one of only two that have been analyzed for protein residue from ice age animals, Bamforth said. Mahaffy paid for the analysis by California State University in Bakersfield. A biotech entrepreneur, Mahaffy is familiar with the process. He is the former president and chief executive officer of Boulder-based Pharmion Corp., acquired by Celgene Corp. for nearly $3 billion in 2007. Mahaffy wants to donate most of the tools to a museum but plans to rebury a few of them in his yard. "These tools have been associated with these people and this land for 13,000 years," he said. "I would like some of these tools to stay where they belong." [Talk about an invitation to looters to visit your front yard, yikes!]
Posted by Jan at 9:09 PM