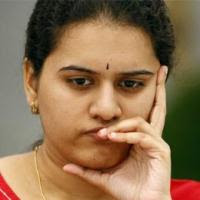 High drama! Can you tell the Indian press is upset with Humpy's current standing at the Ataturk? Koneru Humpy draws second chess tournament March 11, 2009 Top seed women grandmaster Koneru Humpy of India again settled for her second draw against Shen Yang of China and on the trot to slip to the joint third place in the IS Bank Ataturk Women Grand Prix chess tournament. Now Humpy and Zhao Xue of China share the third place with three points apiece. Humpy will now have to work harder in the remaining seven rounds of this 12-players round robin tournament which is a part of the next world championship cycle.
Posted by Jan at 9:25 PM