Here is one of the partial wall paintings excised from Sobekhotep's tomb: 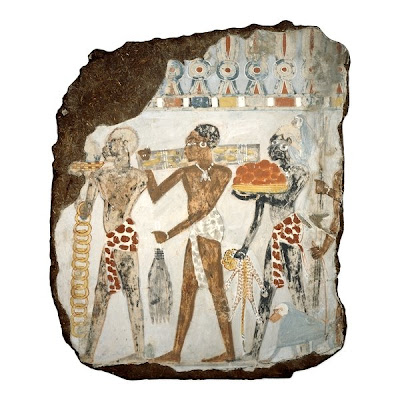 As much as the beauty of the painting, what caught my eye was the obvious game board carried on the shoulder of the first fellow in this procession! Why do I call it a game board? Because it's checkered! I think it must represent a Senet board (30 squares) which, during this time period in Egyptian history, was often depicted as checkered in other tomb paintings. However, it was not mentioned in the description of the scene, which is in the possession of the British Museum (with several other scenes). Here is what the British Museum says: Fragment of painted plaster from the tomb of Sebekhotep From Thebes, Egypt 18th Dynasty, around 1400 BC Africans bearing gold and other items Sebekhotep was a senior treasury official of the reign of Thutmose IV (1400-1390 BC). One of his responsibilities was to deal with foreign gifts brought to the king. This fragment was a small part of a scene that showed Sebekhotep receiving the produce of the Near East and of Africa on behalf of Thutmose IV. Three men (probably Nubians) carry luxury items characteristic of their country: gold rings, jasper, ebony logs, giraffe tails, a leopard skin, a live baboon and a monkey. The variation of the colour of the men's skin may represent their different skin types, though it could have been done for aesthetic reasons, to make the individual figures stand out more. Such scenes represented Sebekhotep's importance as an official, and his relationship with the king; Sebekhotep enjoyed the privileges of office in death as in life. E. Dziobek, Das Grab des Sobekhotep. Thebe (Mainz, Zabern, 1990) S. Quirke and A.J. Spencer, The British Museum book of anc (London, The British Museum Press, 1992) I don't understand why this game board was not mentioned by the specialists. As it was carried by the lead member of this Ethiopean (?) party, it must have been specially made for Pharaoh - perhaps out of precious woods, ivory, alabaster and inlaid gold. The image is small so it's hard to tell, but it also appears that there is one, and possibly two, pieces OF - SOMETHING - on the board. Thanks to dondelion for pointing out the second piece at the far left end of the board, the part that is chopped off at the end of the image. I was not sure whether they represent game pieces or flowers (lotuses), but I am leaning toward game pieces. Perhaps they represent "little green men" game pieces, which were depictions of the god Horus as an infant, made out of blue/green faience or, perhaps, turquoise or malachite if it was gift to Pharaoh. I confess - my first impression was of a dancing Buddhah in a blue robe! Is there someout out there who can provide more information on what those items are on top of the game board?
Posted by Jan at 8:03 PM