More on the Discovery of the Gold Jewelry from Egyptian Tomb 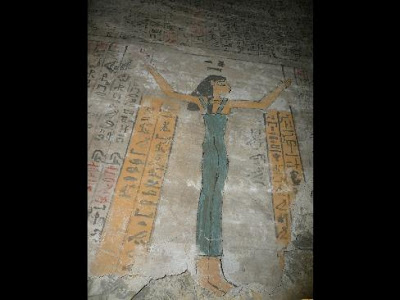 A name! We have a name of the owner of the tomb! From Bloomberg.com Ancient Egyptian Gold Found in Luxor by Spanish Archaeologists March 10 (Bloomberg) -- Spanish archaeologists digging on the west bank of Luxor, Egypt, have discovered jewelry in a tomb of a state treasurer who lived some 3,500 years ago under the reign of Queen Hatshepsut. The team found five gold earrings and two gold rings that probably belonged to Djehuty -- the so-called overseer of treasury, who supervised works under Hatshepsut -- or his family in a newly discovered burial chamber in his tomb, the Egyptian Culture Ministry said in an e-mailed statement today. The chamber, the second in the tomb, is the fourth dating to this period that has been found with painted walls, the statement said. Two of its walls are decorated with texts from the Egyptian Book of the Dead and the ceiling bears a mural of the goddess Nut (image, above). Jose Galan of Madrid’s National Research Center and his team have been excavating at the site in Dra Abu El-Naga on the west bank of Luxor since 2002 and discovered a 3-meter shaft inside Djehuty’s tomb at the end of the 2008 archaeological season. The new burial chamber was then discovered earlier this year, the statement said. While the names of Djehuty, his father and mother, were erased from the first upper burial chamber found, their names are intact in the recently discovered lower burial chamber, it said. Hatshepsut, one of the few women to rule Egypt, was pharaoh from 1479 B.C. to 1458 B.C. To contact the reporter on this story: Mahmoud Kassem in Cairo at mkassem1@bloomberg.net Last Updated: March 10, 2009 10:19 EDT
Posted by Jan at 8:39 PM