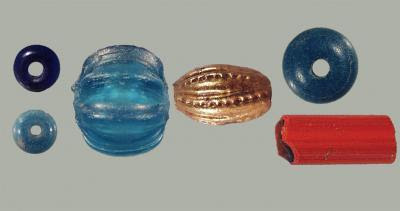 I ignored this story when it first surfaced but I have to say the visual evidence of world-wide trade found in a 1600's remote Spanish outpost in Georgia (the state of Georgia in the U.S.) is, well, beautiful! (Image: In the top left is a common cobalt blue seed bead, most likely from Venice (20,906 found). Below that is a Venetian turquoise/green-blue seed bead or rocaille (5777 found). To the right of these is a unique blue green melon bead from China, then a Spanish gilded oval glass bead (15 found). On the top right is an Ichtucknee plain turquoise blue bead with white patinas now thought to be manufactured in France (one of 5,265). Below that is a green Heart bugle bead with a thin clear veneer over red-orange glass over green glass from the Margariteri guild of Venice (one of 5). (Credit: AMNH)) Story from Science Daily: Largest 17th Century Bead Repository Found In Coastal Georgia ScienceDaily (Apr. 17, 2009) — French and Chinese blue glass, Dutch layered glass, Baltic amber: roughly 70,000 beads manufactured all over the world have been excavated at one of the Spanish empire's remotest outposts, the Santa Catalina de Guale Mission. The beads were found as part of an extensive, ongoing research project led by a team of scientists from the American Museum of Natural History on St. Catherines Island off the coast of Georgia. Comprising the largest repository ever from Spanish Florida, the beads enlighten archaeologists about past trade routes and provide clues to the social structure and wealth of the people. "This is the northernmost outpost of the Spanish empire, but we see evidence of ancient trade routes from China via Manila's galleons to Mexico and Spain," says Lorann Pendleton, Director of the Archaeology Laboratory at the Museum. "We also have found perhaps the first evidence of Spanish beadmaking, along with beads from the main centers of Italy, France, and the Netherlands." The mission of Santa Catalina de Guale was inhabited by Franciscan missionaries and local people for most of the 17th century. The mission was a major source of grain for Spanish Florida and a provincial capital until1680, when the mission was abandoned after a British attack. Since 1974, David Hurst Thomas, Curator of Anthropology at the Museum, and colleagues have been carefully unearthing this part of the island's history. The current research is based on the complete excavation of the church's cemetery and extensive survey and excavation in other parts of the mission. Years of analysis reveal roughly 130 different types of beads on the island, and numbers of specimens per type range from one to 20,000. Most of the more common beads are of Venetian and potentially French origin, with new research suggesting that one of the most common beads of the 17th century, the Ichtucknee blue, was manufactured in France. Some of the unique beads, though, may be Spanish, Chinese, Bohemian, Indian, or Baltic in origin. While roughly 2,000 beads were found elsewhere at the mission (such as in the convent), most were found in the cemetery under the church. These were items intentionally deposited with individuals as grave goods, and the analysis of these items shows that there were subtle temporal and spatial changes in how the cemetery was used. Most burials found with large numbers of beads appear to date to the earlier part of the mission's history (the first half of the 17th century); items found with burials that date to the latter half of the 17th century are more likely to be religious medallions and rosaries. But because almost half the beads in the cemetery were buried with a few individuals who tended to be near the altar, it is often assumed that they were of high status in the community. "A higher number of beads were found toward the altar, and some of the highest-status individuals (by number of beads) were children," says Pendleton. "This gives us lots of information about Guale society and means that status was ascribed with birth." Elliot Blair, graduate student in the Department of Anthropology at the University of California at Berkeley, agrees but points out that "the picture that is emerging is turning out to be much more complicated than people had thought. It's hard to say whether the presence of the beads reflects native or church hierarchies, the presence of wealthy individuals, or something else entirely. Still, this is the largest assemblage of beads ever found in a Spanish mission in La Florida, and the study of these materials has yielded considerable information about how Guale society, burial practices, and Spanish missionization changed during the 17th century." The number of beads found on St. Catherines Island suggests that Santa Catalina de Guale was a relatively wealthy outpost. The island is fertile and was the capital of a mission province, both potential explanations for the high number of beads found when compared to other missions. "St. Catherines was a frontier mission, but it also was a bread basket for the east-coast Spanish empire," explains Pendleton. "The missionaries at St. Augustine were always starving—you can read this in the letters written at the time—because that area was too humid and hot for corn to grow easily. St. Catherines was able to trade corn for beads." The new research, authored by Blair, Pendleton, and bead expert Peter Francis, Jr., is published in the Anthropological Papers of the American Museum of Natural History. Francis, who did much of the detailed analysis of where beads were manufactured, died while on a research trip to Ghana, Africa, in 2002. The research was funded in part by the Edward John Noble Foundation. Adapted from materials provided by American Museum of Natural History, via EurekAlert!, a service of AAAS.
Posted by Jan at 8:04 PM