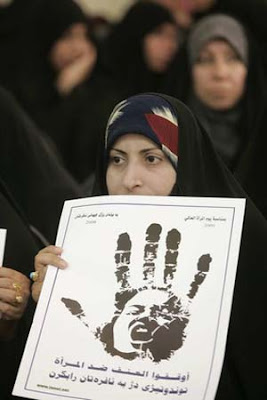 The treatment of women in Iraq is barbaric, but I think you veer off into some oddball dangerous thinking when you claim Islam teaches such behavior is ok.
This is what the religion of Jesus teaches:

"A shameless woman shall be counted as a dog; but she that is shamefaced will fear the Lord." (Eccles.26:25)

"For from garments cometh a moth, and from women wickedness. Better is the churlishness of a man than a courteous woman, a woman, I say, which bringeth shame and reproach." (Eccles. 42:13-14)

"When men strive together one with another, and the wife of the one draweth near for to deliver her husband out of the hand of him that smiteth him, and putteth forth her hand, and taketh him by the secrets: then thou shalt cut off her hand, thine eye shall not pity her." (Deuteronomy 25:11-12)

"Behold, here is my daughter a maiden, and his concubine; them I will bring out now, and humble ye them, and do with them what seemeth good unto you: but unto this man do not so vile a thing. But the men would not hearken to him: so the man took his concubine, and brought her forth unto them; and they knew her, and abused her all the night until the morning: and when the day began to spring, they let her go." (Judges 19:24-25)

"Let your women keep silence in the churches: for it is not permitted unto them to speak; but they are commanded to be under obedience, as also saith the law. And if they will learn any thing, let them ask their husbands at home: for it is a shame for women to speak in the church." (I Corinthians 14:34-35)

"Samaria shall become desolate; for she hath rebelled against her God: they shall fall by the sword: their infants shall be dashed in pieces, and their women with child shall be ripped up." (Hosea 13:16)

The problem is not the religion itself, but the political application of the faith. If the Bible were literally codified into law, there would be some pretty barbaric things allowed to happen to women here too.

Most people in the modern world realize that the crap you cited from the Bible is just that - bullshit! Any man tried to treat me and most women in the western world that way he'd get smacked upside his head AND slapped with a law suit for sexual discrimination.

Christ did not discriminate against females or treat them like dogs, either before - or after - his death. The "elect" referred to in the Bible who are supposedly to share immortal life with Christ in Heaven are both females and males, not just males. The kind of foolish thinking that Christ was trying to overturn by establishing a few simple but profound principles to live by was, unfortunately, undermined by Paul and his misogynistic baloney (and others of Paul's ilk) who infiltrated the early church after Christ's death. But if it hadn't been Paul some other ass would have come along and taught the same crap. It's very sad that some men think so little of themselves that they have to denigrate 51% of the population in order to try to puff themselves up. It's even worse when men who do know better deliberately use sexual discrimination as a tool to achieve their own ends.

Eventually, that kind of man will fall, and their teachings with them. You say my thinking veers toward the oddball and dangerous. I suppose it does sometimes. You haven't lived my life.

The thinking that is really dangerous is that which teaches men it is all right to rape women and men to "teach them the fear of God." That is going on in Iran right now. You can read all about it at Nico Pitney's blog at the Hufington Post.

Why aren't the Mullahs from other countries speaking out against this? They seem to have no problems condemning the decadent West - what's that Christ said - first remove the beam from your own eye and then you can clearly see the mote in mine. Think I'm pissed off about what's going on in Iran and that shit that Islam condones in the name of God? You betcha.

Instead of arrogant females, and their emasculated 'supporters', CONSTANTLY ignoring/ridiculing/denying what the religious texts say about, and to, them...they should actually start to realise WHY they constantly say these things about them, and actually start to be good, real, WOMEN.

Just spurning the judgement, criticism and warnings given you is NOT an excuse.

So many women float along presuming their looks and higher 'status' will excuse all that they do.
Well, you've got to realise that being beautiful does not make everything that you do, beautiful.

Trying to piss around making false claims about how the religious texts have been "interpreted" is a cowardly and arrogant ploy.

You should start to realise WHY the Holy Books condemn so many women so strongly!

I thank Goddess every day that I was born in the USA. We have our problems and issues to deal with here as a nation, but at least we are free to express ourselves and work freely for a living. You don't like what I say - that's fine with me. I think what you said sucks, but you have the right to say it too. With a not to the Goddess Liberty, fully appreciating the irony, I'm publishing your comment so whoever reads it can draw their own conclusions about you, Mr. Anonymous Scott.