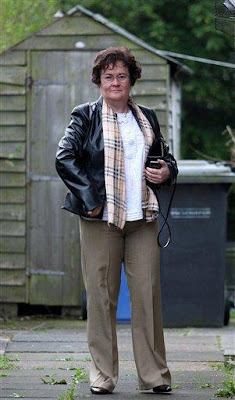 Oh come on! People are having fits because Susan Boyle went from dowdy caricature to polished. Not much of a make-over, when all is said and done, but what she did packs a positive punch. (Photo from AP - showing SB's new look). She got her hair colored (which she should have been doing all along since she is prematurely grey at 47-48, and the grey frizz made her look like she was 77-78 instead of her actual age), she got a conservative hair-cut that got rid of the frizz and now frames her cheekbones and highlights her eyes in a becoming manner, and she got her formerly excessive eyebrows waxed into a much more flattering shape. The Groucho Marx look is gone, thank goddess! About damn time, Girl! Her outfit in this photo is age appropriate and classy - nice-fitting sleek-styled neutral slacks that lengthen her sillouette, heeled shoes but not spiked heels (which would look ridiculous with her body proportions), a pretty, feminine and fashionably decorated white blouse (one of the "hot" looks this season), and just the right size purse with a must-have shoulder strap; she's not trying to look 30, nor should she. I love her front-on confident stance in this photo, staring straight at the camera, which is also the best angle to minimize a double chin (I know from much practice). I think Ms. Boyle looks great in her "make-over" and I give her kudos for being gutsy enough to undertake such a "transformation" under the glaring public eye! All you people moaning because she doesn't look frumpy anymore, what is your problem? Why wouldn't you want Ms. Boyle to make the most of what she has? In my opinion, she now appears a striking woman - to match that striking voice. I love Susan Boyle's voice. I've listened to her "Les Mis" recording from Britain's Got Talent a few times, and thought it was well-worth the plaudits it has received. And what is this - did I read recently that it has received over 70 MILLION You-Tube hits, and counting. This is some serious business! I've also listened to SB's ten-year old recording of "Cry Me A River" over and over again. I can't seem to get enough of it. Her rendition absolutely blew me away, floored me, knocked me off my bar-stool - take your pick of cliches. I don' know what, exactly, it is about how she sings that song, but something - something - can't describe it, and I'm not even going to try - just reaches out and grabs me. I'd pay good money to listen to the lady sing in person, and pay good money to buy a CD or DVD of SB singing "standards."
Probably like millions of other people, I'm eagerly awaiting her next appearance on You Tube, after her May 23 (I think that's the date) appearance on Britain's Got Talent. What will she sing? What will she wear? Wow - it's probably going to be one of the highest-rated shows on British television of all time!
Posted by Jan at 11:09 PM

Yes, She is gorgeous and i love her voice.