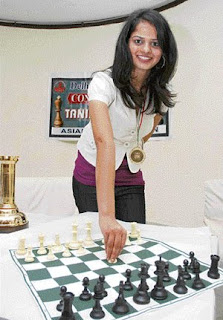 Geez! No author listed; yeah, I'd be embarassed to write something like this about one of the best female chessplayers in the world, too. From The Times of India 'Men get intimidated as I'm a chess player’ 30 September 2009, 12:00am IST So what if she’s associated with a serious sport like chess? That hasn’t stopped the 23-year-old Tania Sachdev from chilling out with friends or keeping herself up to date with the latest fashion trends. Just recently, when we caught up with her at a fashion event, she was seen flaunting a short dress with her hair stylishly done. “You know when I’m not playing chess, I’m doing this,” she said, pointing at her new dress. And not just this! Back from the Women’s World Team Championships, where India was ranked seventh, the gal’s been chilling out quite a bit with her friends too! And although she loves hitting the dance floor, she thinks she has two left feet. “But nevertheless, I still dance a lot. In fact, I thought I should relax before I got back to the practice sessions again for the Asian Indoor Games in Vietnam,” she says. However, Tania is also looking forward to the games because she wants to discover Vietnam. “I’ve heard a lot about water puppetry there. And I want to check it out for myself,” Tania says. So, with so much happening, doesn’t Tania get a lot of male attention? “Ah, where are they? No, I guess they get intimidated because I am a chess player. Moreover, I have a lot of time to do all that, right?” Absolutely, girlie!
Posted by Jan at 10:08 AM