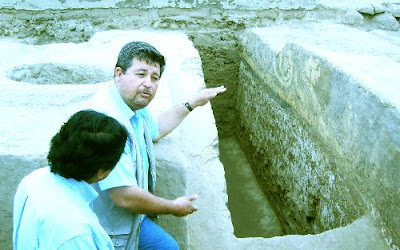 [Photograph: Archaeologist Carlos Wester shows polychrome mural found at Chotuna archaeological complex. Photo: ANDINA / Silvia Depaz.] Story from Andina.com.pe Polychrome mural found in archaeological complex of Chotuna Chiclayo, Sep. 30 (ANDINA).- A polychrome mural was found in the facade of a ceremonial temple located in the northern part of the Chotuna archaeological complex, 10 miles west of Lambayeque city, which features friezes with circular designs and the anthropomorphic wave, icon of Lambayeque’s culture. The religious building dates from 9th and 10th centuries AD, corresponding to the Lambayeque culture, said the leader of excavations at the Chotuna-Chornancap camp, Carlos Wester, who presented the findings today. According to Wester, a platform emerged only after the systematic removal of a dune higher than 15 meters. Evidences of polychrome surfaces -with red and cream colored chess designs- were found at the north facing top level of this platform. (Emphasis added) "These were the first signs of the mural’s discovery, which encouraged us to continue excavations where, months later, we could find a structure featuring friezes with circular designs," he said. Last year, a group of 11 skeletons of sacrificed women was discovered in the Huaca Norte, located at the archeological complex of Huaca Chotuna. (END)SDC/JOT/RMB
Posted by Jan at 7:36 PM