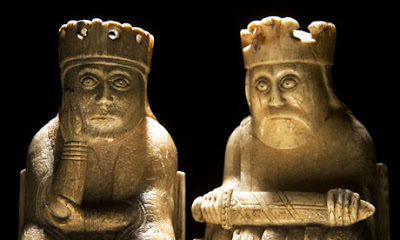 Oh oh. I wouldn't give odds on Scotland deciding to keep the pieces they claim are theirs, after all! [Photo: A queen and a king form part of the medieval Lewis chess sets. Photograph: Murdo MacLeod.] The expressions on this queen and king are priceless! Article at the Guardian.co.uk Lewis chessmen reunited after 170 years for tour of Scotland Figures carved from whale teeth and walrus ivory found in Western Isles at some point before 1831
Severin Carrell, Scotland correspondent guardian.co.uk, Thursday 1 October 2009 18.57 BST
They were worked from polished walrus ivory and whale teeth by Norse craftsmen more than 800 years ago, and weigh in at less than 245 grams.
Now, more than 170 years after the Lewis chessmen were found buried under a Scottish beach, many will be reunited after years of wrangling.
The Scottish culture minister, Michael Russell, and Bonnie Greer, the deputy chair of the British Museum's trustees, confirmed 30 of the 93 chess pieces will be reunited for the first time in more than a century for a tour of Scotland.
The Lewis chessmen have puzzled historians and irritated Scottish nationalists since they were found on a beach on Uig, on the west side of Lewis in the Western Isles, at some point before 1831.
Some believe they may have been buried for safekeeping by a merchant travelling from Norway to Ireland; others think they belonged to a nobleman in what was then a powerful island kingdom linked to Norway.
The set was broken up after being exhibited by the Scottish Society of Antiquaries in 1831, which could not afford to buy it. An Edinburgh dealer sold the pieces for 80 guineas to the British Museum, which now holds 82 of them. The remaining 11 are kept by the National Museum of Scotland.
Russell said the Scottish National party government firmly believed the entire set belonged in Scotland, but had compromised with the British Museum.
Nationalists claim the controversy is akin to the row over the Elgin marbles, but others say the chessmen were freely sold when Scotland could not afford them.
Posted by Jan at 6:55 PM

It is indeed quite frustrating that the whole set is not kept together... everyone knows the feeling we get when a nice ches set is missing some pieces...