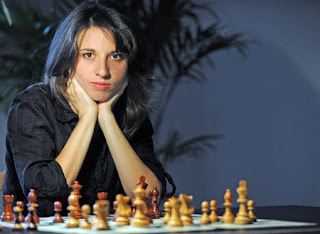 She lives in "Squirrel Hill" - I take that as a good omen :) (Photo: Iryna Zenyuk, 23, of Squirrel Hill will compete in the U.S. Women's Chess Championships in St. Louis next week. Philip G. Pavely/Tribune-Review ) From the Pittsburgh Tribune Review Squirrel Hill chess player hooked on strategy, winning By Jodi Weigand TRIBUNE-REVIEW Tuesday, September 29, 2009 Every morning, Iryna Zenyuk gets on her computer to video conference with her chess coach in Ukraine who is helping her prepare for this week's U.S. Women's Chess Championship. She studies chess from 6:30 to 8:30 a.m. before heading to her job in a research lab at Carnegie Mellon University, where she is working toward a master's degree in mechanical engineering. Eventually, she hopes to earn a doctorate. Zenyuk, 23, who moved from New York City to Squirrel Hill in July to attend CMU, said the strategy of the game and thrill of winning keep her coming back to the chessboard. "The satisfaction that the game gives you -- I can't compare it to anything else," said Zenyuk, who is ranked eighth among American women chess players. "You have a vision in your game. ... It is such a thing of beauty of strategy and planning. You get to achieve all your ideas in such a short time spent." Zenyuk is a Woman International Master, one step below Grandmaster, the highest ranking awarded by the World Chess Federation. She will compete against 10 of the top 12 women players in the country during the chess championship Saturday through Oct.13 in the Chess Club and Scholastic Center of Saint Louis, in Missouri. "She has just as much of a chance as anyone to win," said Tony Rich, the center's executive director. "She will be a fierce competitor." The hardest part of the tournament will be playing two of her closest friends: Irina Krush, who at 14 became the youngest player to win the U.S. Women's Championship in 1998, and Tatev Abrahamyan, who has played for the championship five times. "It's uncomfortable for them and for me because I have to treat them as enemies," Zenyuk said. "And then after the game we have to become friends again." The player with the most points at the end of the round-robin tournament will win $15,000, the biggest share of the $64,000 purse. Zenyuk said that if she takes first place, she might use the money for a down payment on a car. Zenyuk grew up in Ukraine and moved to the United States when she was 15 to join her mother, Polina Zenyuk, who had emigrated six years earlier. She has been playing chess since she was 4, when she started competing daily with her grandfather. By age 7, she spent two hours a day at a local chess club and played in weekend tournaments. "I didn't think of being a top player," Zenyuk said. "As I grew older, at 15 and 16, that was my goal. I put so many hours into chess, about six hours a day. You don't spend that much time for a hobby." The dedication paid off when she accomplished what she considers the highlight of her career -- defeating Grandmaster Giorgi Kacheishvili. "He is top-ranked among men in the U.S., and this win was very shocking for everybody because I was very underrated," she said. "So it was a big deal because not many people get a chance to beat a grandmaster."
Posted by Jan at 10:18 AM

I found your website looking for Zenyuk, really interesting! I also have a chess blog, which should provide some laughs if you ever have some time to kill!