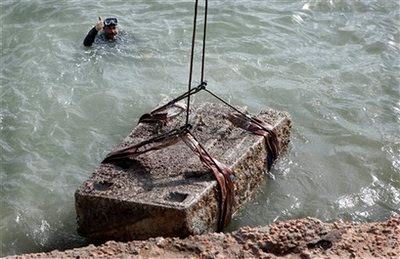 Monument lifted from Cleopatra's underwater city By KATARINA KRATOVAC, Associated Press Writer Katarina Kratovac, Associated Press Writer – Thu Dec 17, 9:39 pm ET ALEXANDRIA, Egypt – Archaeologists on Thursday hoisted a 9-ton temple pylon from the waters of the Mediterranean that was part of the palace complex of the fabled Cleopatra before it became submerged for centuries in the harbor of Alexandria. The pylon, which once stood at the entrance to a temple of Isis, is to be the centerpiece of an ambitious underwater museum planned by Egypt to showcase the sunken city, believed to have been toppled into the sea by earthquakes in the 4th century. Divers and underwater archaeologists used a giant crane and ropes to lift the 9-ton, 7.4-foot-tall pylon, covered with muck and seaweed, out of the murky waters. It was deposited ashore as Egypt's top archaeologist, Zahi Hawass, and other officials watched. The pylon was part of a sprawling palace from which the Ptolemaic dynasty ruled Egypt and where 1st Century B.C. Queen Cleopatra wooed the Roman general Marc Antony before they both committed suicide after their defeat by Augustus Caesar. The temple dedicated to Isis, a pharaonic goddess of fertility and magic, is at least 2,050 years old, but archaeologists believe it's likely much older. The pylon was cut from a single slab of red granite quarried in Aswan, some 700 miles (more than 1,100 kilometers) to the south, officials said. "The cult of Isis was so powerful, it's no wonder Cleopatra chose to make her living quarters next to the temple," said coastal geoarchaeologist Jean-Daniel Stanley of the Smithsonian's National Museum of Natural History. Egyptian authorities hope that eventually the pylon will become a part of the underwater museum, an ambitious attempt to draw tourists to the country's northern coast, often overshadowed by the grand pharaonic temples of Luxor in the south, the Giza pyramids outside Cairo and the beaches of the Red Sea. They are hoping the allure of Alexandria, founded in 331 B.C. by Alexander the Great, can also be a draw. Cleopatra's palace and other buildings and monuments now lie strewn on the seabed in the harbor of Alexandria, the second largest city of Egypt. Since 1994, archaeologists have been exploring the ruins, one of the richest underwater excavations in the Mediterranean, with some 6,000 artifacts. Another 20,000 objects are scattered off other parts of Alexandria's coast, said Ibrahim Darwish, head of the city's underwater archaeology department. In recent years, excavators have discovered dozens of sphinxes in the harbor, along with pieces of what is believed to be the Alexandria Lighthouse, or Pharos, which was one of the seven wonders of the ancient world. The pylon is the first major artifact extracted from the harbor since 2002, when authorities banned further removal of major artifacts from the sea for fear it would damage them. "The tower is unique among Alexandria's antiquities. We believe it was part of the complex surrounding Cleopatra's palace," Hawass said, as the crane gently placed the pylon on the harbor bank. "This is an important part of Alexandria's history and it brings us closer to knowing more about the ancient city." Hawass has already launched another high-profile dig connected to Cleopatra. In April, he said he hopes to find the long-lost tomb of Antony and Cleopatra — and that he believes it may be inside a temple of Osiris located about 30 miles (50 kilometers) west of Alexandria. The pylon extracted Thursday was discovered by a Greek expedition in 1998. Retrieving it was a laborious process: For weeks, divers cleaned it of mud and scum, then they dragged it across the sea floor for three days to bring it closer to the harbor's edge for Thursday's extraction. A truck stood by to ferry the pylon to a freshwater tank, where it will lie for six months until all the salt, which acts as a preservative underwater but damages it once exposed, is dissolved. Still in its planning stages, the underwater museum would allow visitors to walk through underwater tunnels for close-up views of sunken artifacts, and it may even include a submarine on rails. A collaboration between Egypt and UNESCO, the museum would cost at least $140 million, said Darwish. The above-water section would feature sail-shaped structures that would complement the architecture of the harbor and have the city's corniche seabank in the backdrop, with the splendid Alexandria Library on the other end of the bay, Darwish said. "To me, the greatest draw would be that visitors would be able to see these amazing objects in their natural surrounding, not out of context on some museum shelf," said Stanley, who has carried out excavations around Alexandria but is not involved in the underwater dig. Speaking to The Associated Press by phone from Washington, Stanley cautioned that the dangers to such a museum would be twofold — from storms, which in wintertime have been known to sink ships in Alexandria's harbor, and from earthquakes. Egypt and UNESCO are still studying the feasibility of building such an underwater museum. No one knows where the money would come from, but there is hope construction could start as early as late 2010. "If the study shows it's possible, this could become a magical place, both above and underwater," Hawass said. "If you can smell the sea here, you can smell the history." Darwish, one of seven Egyptian archaeologists who are also qualified divers, said the country has had to rely on foreign expertise, mostly French and Greek, for diving archaeology expeditions around Alexandria. That will change, he says, as the Alexandria university educates more underwater archaeologists. A temporary downtown museum will house the Isis pylon extracted Thursday and some 200 other objects removed from the sea here in the last decade.
Posted by Jan at 6:31 PM