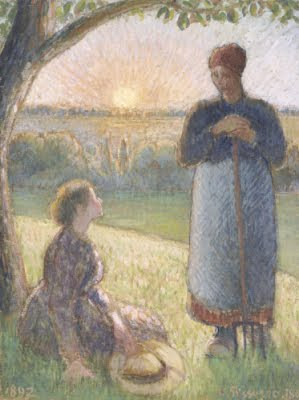 Women worked double duties in this pre-plague village in England and developed Popeye-like muscles and larger than average bones. This painting by Pissarro was done several hundred years later in the 19th century, but shows that strong-built "country" women weren't just a fluke of the Middle Ages. (Image: Camille Pissarro, Country Women Chatting, Sunset, Eragny, 1892) Bones find from abandoned village 'show tough life of medieval women' Skeletons from Wharram Percy have much larger bones than those of city contemporaries Martin Wainwright guardian.co.uk, Thursday 17 December 2009 17.53 GMT The fearsome northern woman of legend and cliche, broadchested and with a frying pan poised to whack sense into her man, has proved to have genuine historic origins. Analysis of bones from Britain's biggest medieval excavation has unearthed a race of real-life Nora Battys, ruling a Yorkshire roost nearly 1,000 years ago. Skeletons from Wharram Percy, a village on the Yorkshire Wolds abandoned after the 14th century Black Death, have much larger bones than those of contemporaries elsewhere. "The differences are really quite pronounced," said Simon Mays, of English Heritage, who has measured 120 sets of women's bones from the site. "Women at Wharram were much more muscular and bigger boned than their city counterparts. Whilst they were still doing the domestic chores and looking after children, they clearly also mucked in with the hard labour in the fields, building up their arm strength." Whether they used this to assert themselves in the running of the village is likely to remain conjecture, but the archaeology suggests that social roles were less divided than they later became. Grinding poverty, if nothing else, obliged the "gentler sex" to multi-task in the fashion of many modern women. "The research underlines the way that the sexual division of labour was much less marked in rural areas than in the cities of the time," said Mays. "The evidence from the Wharram bones speaks volumes, and reinforces that notion that life in the village was far from a rural idyll." Like the archetypal Nora, a West Riding dragon played by Kathy Staff in the long-running TV comedy Last of the Summer Wine, the Wharram women were substantial as well as strong. Their bones are wider than average and with thicker walls, a sign of calcium and other components being deposited as muscles are worked harder and gain mass. Wharram's insights on the state of medieval Britain are set to continue, as work continues on hundreds of thousands of remains excavated between 1950 and 1990. The site, surrounding a lonely church in a remote grassy valley, is the best-preserved of Britain's 3,500 abandoned villages.
Posted by Jan at 7:10 PM