The Real Truth Behind Those Flying "Reindeer" 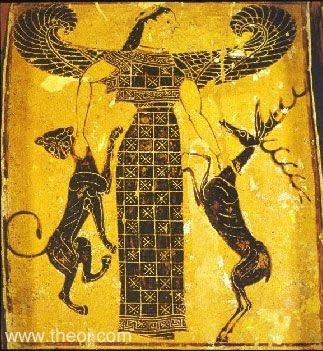 Attention all those who believe in Santa Claus a/k/a Saint Nicholas. The origin of flying "reindeer" goes back much farther than the red-coated, white-whiskered, gift-giving Wonder invented by an illustrator in the 19th century. I wonder if he was a student of the ancient classics? Hmmm... Check this out: Artemis, depicted at Potnia Theron (a/k/a Lady of the Beasts). Image, thanks to Mr. Don who posted it at Goddesschess, and doesn't her skirt look like a checkered gameboard now:

SUMMARY
Detail of Artemis, here depicted as the Potnia Theron (Lady of the Beasts), from the Francois Vase. The goddess is winged, and grasps a panther (or lioness) and stag by the neck.

Yes, it's true! The origin of those flying reindeer is none other than the Great Goddess Artemis flying through the air holding a sacred lionness in one hand and a sacred horned stag (a/k/a "reindeer") in the other! Dashing through the sky, She wings her way on high, waving a horned deer, she's looking for some beer...

Okay, so Irving Berlin I'm not. But the key elements of Santa Claus flying through the air in a sleigh pulled by "eight tiny reindeer" (19th century version of the legend) are featured, except Santa Claus is actually a Great Goddess: (1) Goddess/figure postulated to be a Goddess (2) flying through the sky (she can be a bird goddess, on a winged horse or in a chariot pulled by flying horses, or winged herself (3) closely associated with horned animals (such as stag, ram or unicorn), or other animals (those flying horses, for instance) and/or animals of power/rulership (lion/lioness, eagle and other birds of prey).

The other part of the legend is that she can bring blessings - or curses. In modern terminology and much more benign - gifts, or lumps of coal - just like old St. Nick.

Cf:
Rhiannon (Rhiannon flies like a bird through the sky and wouldn't you love to love her..., lyrics made popular by Fleetwood Mac in their hit song "Rhiannon"), who is closely associated (and may, indeed be an aspect of) the great Celtic Horse Goddess, Epona. 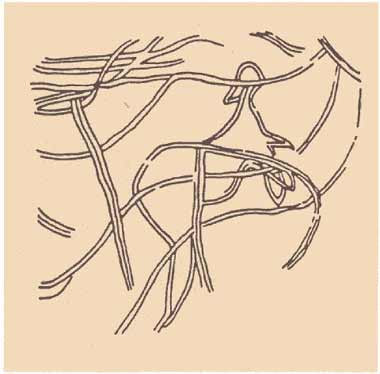 How about this very early candidate for being the original "Mother Goose?" Whenever I read about geese I am reminded, first of all, about how sacred the goose was in ancient Egypt and, secondly, how goose was the dish of choice served at Christmas in any household that could possibly scrape together the money to afford one in Dickens' England (for instance, fictional "Clerk" Bob Cratchett's family feasted on goose in Dickens' tale of loss and redemption in Scrooge a/k/a "A Christmas Carol.") The association of Goddess and goose is an ancient one, but in ancient Egypt, the sacred goose was a God known as Geb. Personally, I think something was lost in translation somewhere along the way, or perhaps the original Geb was a hermaphrodite and modern translators just don't "get it."

But that's going in a different direction, actually, since I think that this very old line drawing actually shows a skirted female riding atop a somewhat abstract style horse figure travelling through some trees...
Posted by Jan at 10:47 PM