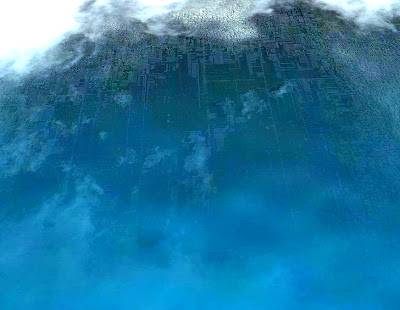 Hmmmm - well, I guess we'll see if more information comes to light on this 'discovery.' Maybe it is legit - but the photographs (several in article)? I don't know anything about photography so I can't judge, it would be interesting to see what others think about those photographs. This one looks to me to be a high altitude shot of Los Angeles or some other large seaport! Previously undiscovered ancient city found on Caribbean sea floor By Jes Alexander on December 9, 2009 WASHINGTON, DC (Herald de Paris) - EXCLUSIVE - Researchers have revealed the first images from the Caribbean sea floor of what they believe are the archaeological remains of an ancient civilization. Guarding the location’s coordinates carefully, the project’s leader, who wishes to remain anonymous at this time, says the city could be thousands of years old; possibly even pre-dating the ancient Egyptian pyramids, at Giza. The site was found using advanced satellite imagery, and is not in any way associated with the alleged site found by Russian explorers near Cuba in 2001, at a depth of 2300 feet. “To be seen on satellite, our site is much shallower.” The team is currently seeking funding to mount an expedition to confirm and explore what appears to be a vast underwater city. “You have to be careful working with satellite images in such a location,” the project’s principle researcher said, “The digital matrix sometimes misinterprets its data, and shows ruins as solid masses. The thing is, we’ve found structure - what appears to be a tall, narrow pyramid; large platform structures with small buildings on them; we’ve even found standing parallel post and beam construction in the rubble of what appears to be a fallen building. You can’t have post and beam without human involvement.” Asked if this city is the legendary city of Atlantis, the researchers immediately said no. “The romanticized ideal of Atlantis probably never existed, nor will anyone ever strap on a SCUBA tank, jump in the water, and find a city gateway that says, ‘Welcome to Atlantis.’ However, we do believe that this city may have been one of many cities of an advanced, seafaring, trade-based civilization, which may have been visited by their Eurocentric counterparts.” It is unknown at this time how the city came to be on the sea floor, and not on dry land. “We have several theories.” The team hopes to conduct a massive mapping and research expedition, to learn as much as possible about who these people were, before turning the site over to the Caribbean island’s home government. “Whatever we’ve found does not belong to us,” the project’s leader said, “It belongs to the people of this island, and to the world at-large. If any pieces are brought to the surface, they belong in the hands of a museum.” The project team asks that for more information, or to find out how to help fund their research, please contact the Herald de Paris’ publisher, Jes Alexander, at a specially set-up telephone number: 415-738-7811.
Posted by Jan at 7:26 PM