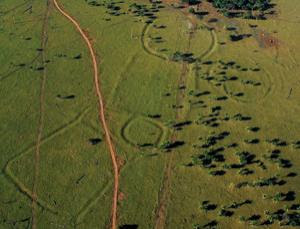 Ancient Amazon civilisation laid bare by felled forest 10 December 2009 by Linda Geddes Magazine issue 2738. Signs of what could be a previously unknown ancient civilisation are emerging from beneath the felled trees of the Amazon. Some 260 giant avenues, ditches and enclosures have been spotted from the air in a region straddling Brazil's border with Bolivia. The traditional view is that before the arrival of the Spanish and Portuguese in the 15th century there were no complex societies in the Amazon basin – in contrast to the Andes further west where the Incas built their cities. Now deforestation, increased air travel and satellite imagery are telling a different story. "It's never-ending," says Denise Schaan of the Federal University of Pará in Belém, Brazil, who made many of the new discoveries from planes or by examining Google Earth images. "Every week we find new structures." Some of them are square or rectangular, while others form concentric circles or complex geometric figures such as hexagons and octagons connected by avenues or roads. The researchers describe them all as geoglyphs. Excavations have unearthed ceramics, grinding stones and other signs of human habitation at some of the sites but not at others. This suggests that some had purely ceremonial roles, while others may also have been used for defence. Unusually for defensive structures, however, earth was piled up outside the ditches, and they are also highly symmetrical. "When you think about defence you're just building a wall or a trench," says Schaan. "You don't have to do calculations to make it so round or square." Many of the structures are oriented to the north, and the team is investigating whether they might have had astronomical significance. "Many of the great early civilisations had a riverine basis and the Amazon has long been underestimated and overlooked in that sense," says Colin McEwan, head of the Americas section at the British Museum in London. . . . Though there is no evidence that the Amazonians built pyramids or invented written language as societies in ancient Egypt or Mesopotamia did, "in terms of a trend towards increasing social complexity and domestication of the landscape, this wasn't just a pristine forest with isolated nomadic tribes", McEwan adds. "These were substantive, sedentary and in the long term very successful cultures." While some Inca sites lie just 200 kilometres west of the geoglyphs, no Inca objects have been found at the new sites. Neither do they seem to have anything in common with Peru's Nasca geoglyphs. "I have no doubt that this is only scratching the surface," says Alex Chepstow-Lusty of the French Institute for Andean Studies in Lima, Peru. "The scale of pre-Columbian societies in Amazonia is only slowly coming to light and we are going to be amazed at the numbers of people who lived there, but also in a highly sustainable fashion. Sadly, the economic development and forest clearance that is revealing these pre-Columbian settlement patterns is also the threat to having enough time to properly understand them." Journal reference: Antiquity, vol 83, p 1084
Posted by Jan at 7:14 PM