Goddess of Liberty Gets a Scrub Up 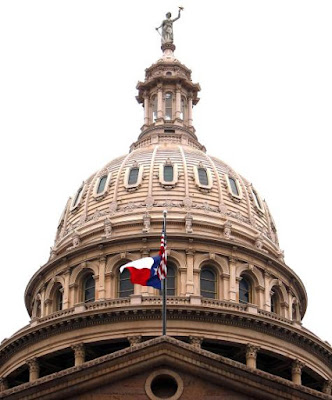 On top of classic-styled domes on state houses all across the country, the Goddess of Liberty looks out over our land from sea to shining sea. This lovely example is from the capital of Texas! CAPITOL From goddess to asbestos, a 10-month overhaul for dome Officials announce project to repaint, repair and refurbish. By Mike Ward AMERICAN-STATESMAN STAFF Saturday, December 12, 2009 The Texas Capitol's granite-hued lid is about to get a makeover. State officials announced Friday that a project to repaint and repair the landmark dome is to begin in late February or March, with the top-knot being surrounded with scaffolding for the better part of 10 months. Also to get cleaned: the Goddess of Liberty statue atop the dome, though officials said it will be polished in place, not removed. Its removal in the 1980s became somewhat of a state embarrassment after workers had trouble getting it back in place. "This will be a significant maintenance project ... the first since the dome was painted in 1992 during the restoration of the Capitol," said John Sneed, executive director of the State Preservation Board, which oversees the 1888 statehouse. Lee Baker, the preservation board's facilities director, said the work will start at the goddess and move downward to the base of the dome. The project is expected to be complete by December 2010. While the dome looks from a distance like it is built of the same pinkish granite as the statehouse, it is actually inner and outer shells of galvanized sheet metal and cast iron pillars supported by the load-bearing stone and brick walls of the Capitol. It has been painted to match the building's granite color since the Capitol was opened, except for a short period in the early 1920s when it was painted white. Texans protested and the granite color was quickly brought back. As part of the maintenance project, Sneed said rusted places on the dome, deteriorated wood around some of the 179 windows and leaks will be repaired. Waterproofing will be added in some areas, and some remaining asbestos will be removed, he said. The dome will be covered with scaffolding for much of the project, just as it was when the Capitol restoration was under way. In addition, plaster repairs and painting will be done inside the dome, officials said. Sneed said the work is being paid for with funds generated by Capitol parking fees, gift shop revenues and concession fees paid from the Capitol Grill cafeteria. Once complete, Sneed said, the dome shouldn't need another paint job for 25 years.
Posted by Jan at 7:44 PM