This from Isis - thanks 'Sis!

King Tutankhamun might have worn some sort of orthopedic shoes specially designed to cope with his club foot condition, an investigation into the pharaoh's footwear has suggested.

Published in the book, "Tutankhamun's Footwear: Studies of Ancient Egyptian Footwear," the research is the first detailed analysis of the 3,300-year-old footwear since King Tut's mummy and treasure-packed tomb were discovered by Howard Carter in 1922.

Even though the mummy had been X-rayed several times, it was only recently, during a major genetic investigation into King Tut's family, that researchers found a series of malformations in the pharaoh's feet.
Apart from a foot bone disorder known as Kohler disease II, King Tut might have had seriously deformed feet which left him hobbling around with the use of a cane.

Indeed, the second toe in King Tut's right foot lacked the middle bone, making it shorter, while the left foot was clubbed, rotating internally at the ankle.  The foot condition might have required appropriate shoes with a tight strap in order to avoid them being dragged over the floor.

Indeed three pairs of shoes found in King Tut's tomb have horizontal straps just below the toes. One of the pairs also features semi-circular panels at the shoe's sides.

"These features are not known in any other footwear, sandal or shoe alike," book author Andre Veldmeijer, a Dutch archaeologist who specializes in ancient Egyptian leatherwork, footwear and cordage, told Discovery News in an exclusive interview.

Over 80 pieces of footwear of different sizes were buried with the boy king. Some are much deteriorated, with just fragments or isolated straps remaining. Others, however, have survived in decent condition. 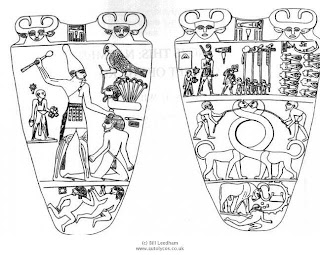 Veldmeijer believes it is unlikely that the most elaborate shoes, complete with gemstone inlays and gold sheets, ever touched the ground.  "King Tut might have been carried around wearing them. Some shoes, such as the elaborate marquetry veneer sandals, might have been carried by a servant," Veldmeijer said. [Image: a rendition of the Narmer Palette, c. 3300 BCE, the images on both sides shows the smaller figure of the King's sandal-bearer directly behind the King (he's the tallest figure on both sides, in one he's wearing the crown of Upper Egypt, in the other the crown of Lower Egypt.]

On the contrary, the seemingly simple sewn sandals, made of palm leaf, grass and papyrus, were the most important items.  "They were a status symbol, only used by those elite who were rewarded by the king and royalty. These sandals were so important that they were even imitated in gold," Veldmeijer said.

According to the archaeologist, the group of smallest size footwear might have fit King Tut when he was 10, the approximate age when he became king in 1333 B.C, while the largest could have been worn just before his death at age 19.  "This suggest that only the shoes he wore as a king were buried with him. Indeed, many sandals show wear, including the print of King Tut's foot on the sole," Veldmeijer said.

Two pair of open shoes were made to be extra comfortable, with the middle part of the sole stuffed to be more soft on the plantar.  Together with a German specialist in reproduction of ancient footwear, Veldmeijer is now testing the "orthopedic" shoe hypothesis by remaking King Tut's leather open shoes.

"We are collaborating with a professor in anatomy to see how deformed the foot was and how the shoes would have helped," Veldmeijer said.

According to Salima Ikram, professor of Egyptology at the American University in Cairo, the speculation is interesting.  "It is entirely feasible that tighter straps on Tut's shoes were due to a possible club foot, as these would hold them in place and enable easy maneuvering," Ikram told Discovery News.
Posted by Jan at 8:25 PM