It's been there all alone, staring the common man and the experts alike, in the face... 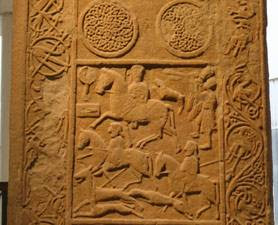 The ancestors of modern Scottish people left behind mysterious, carved stones that new research has just determined contain the written language of the Picts, an Iron Age society that existed in Scotland from 300 to 843.

The highly stylized rock engravings, found on what are known as the Pictish Stones, had once been thought to be rock art or tied to heraldry. The new study, published in the Proceedings of the Royal Society A, instead concludes that the engravings represent the long lost language of the Picts, a confederation of Celtic tribes that lived in modern-day eastern and northern Scotland.  (Image: Rob Knell and Rob Lee.  Riders and horn blowers appear next to hunting dogs on what is called the Hilton of Cadboll stone)

"We know that the Picts had a spoken language to complement the writing of the symbols, as Bede (a monk and historian who died in 735) writes that there are four languages in Britain in this time: British, Pictish, Scottish and English," lead author Rob Lee told Discovery News.

He and colleagues Philip Jonathan and Pauline Ziman analyzed the engravings, found on the few hundred known Pictish Stones. The researchers used a mathematical process known as Shannon entropy to study the order, direction, randomness and other characteristics of each engraving.

The resulting data was compared with that for numerous written languages, such as Egyptian hieroglyphs, Chinese texts and written Latin, Anglo-Saxon, Old Norse, Ancient Irish, Old Irish and Old Welsh. While the Pictish Stone engravings did not match any of these, they displayed characteristics of writing based on a spoken language.

"Lexigraphic writing contains symbols that represent parts of speech, such as words, or sounds like syllables or letters, and tends to be written in a linear or directional manner mimicking the flow of speech," he said. "In semasiography, the symbols do not represent speech -- such as the cartoon symbols used to show you how to build a flat pack piece of furniture -- and generally do not come in a linear manner."

Although Lee and his team have not yet deciphered the Pictish language, some of the symbols provide intriguing clues. One symbol looks like a dog's head, for example, while others look like horses, trumpets, mirrors, combs, stags, weapons and crosses.

The later Pictish Stones also contain images, like Celtic knots, similar to those found in the Book of Kells and other early works from nearby regions. These more decorative looking images frame what Lee and his team believe is the written Pictish language.

"It is unclear at the moment whether the imagery, such as the knots, form any part of the communication," Lee said. He believes the stones also contain semasiographic symbols, such as a picture of riders and horn blowers next to hunting dogs on what is called the Hilton of Cadboll stone. Yet another stone shows what appears to be a battle scene.
Posted by Jan at 9:31 PM