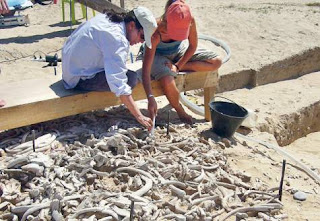 This article doesn't provide a lot of information.  Reports on archaeological work and discoveries coming out of the UAE and countries surrounding are intermittent at best and usually sparse on details!  I'm not certain - but I seem to have a vague recollection of a similar story coming out some time ago. (Image from Gulf News.com - see second story, below)

WAM Umm Al Qaiwain, Apr 10th, 2010 (WAM) -- A French archaeological mission in collaboration with the Department of Antiquities and Heritage has discovered the oldest fishing rites in the Arabian Peninsula that dates back to 3500-3200 BC.

An archaeological excavation held on an islet off the coast of Umm Al Qaiwain, close to the earlier fishing village of Al-Akab revealed that ancient fishing rites were conducted by tribesmen living in the region.

The bones of dugongs, a large marine mammal resembling a sea cow, were found symbolically arranged on a mound which experts believe was used for ceremonial purposes.

The team found that the dugong mound was only a small part of a much larger Neolithic site including the remains of circular homes.

Here is an article with some more details - notice the date - November 6, 2009.  I knew I'd seen this story before.  Ha!  The parallel drawn between the use of dugong as a totemic animal in Australia (from a much later period) and the use of the dugong and green turtle in the Gulf Region (dating back 5,500 to 6,500 years ago) fascinating.

An archaeological excavation held on an islet off the coast of Umm Al Quwain, close to the earlier fishing village of Akab, recently revealed that ancient fishing rites were conducted by tribesmen.

The bones of dugongs, a large marine mammal resembling a sea cow, were found symbolically arranged on a mound which experts believe was used for ceremonial purposes.

It is the oldest bone sanctuary of its type in Arabia according to Dr Sophie Méry of the French Centre for Scientific Research (CNRS) and director of the French archaeological mission in the UAE.

Together with her colleague Vincent Charpentier, from the French National Institute of Archaeological Institute (INRAP), they first excavated the site in 2002 together with the Museum of Umm Al Quwain. They found that the dugong mound was only a small part of a much larger Neolithic site including the remains of circular homes.

"The village we excavated is older than the ritual site by 500 years. The ritual site is not a burial site but a sanctuary which gives it a very different meaning… It is not possible to say the exact number of people who lived in Akab but we think that several families regrouped there for the fishing season," Méry said.

"Traditionally, the dugong has special status in the Indo-Pacific area. The preparation for hunting dugongs is as much the object of propitiatory rites as the transport of their carcasses to shore, their butchering and their consumption," she said.

Around 20 areas in the Gulf region have been excavated. However, research shows that between 6500 and 3100 BC, despite an absence of agriculture, a Neolithic culture developed in the UAE and Oman. One such excavation by a paleontologist in the 1990s initially marked Akab as a dugong butchering place due to the huge number of bones and skulls found there.

It is in fact a sanctuary where the bones of more than 40 dugongs were found stacked and aligned with great care and precision. Méry, Charpentier and colleagues believe the bones have been symbolically arranged for a ritual.

"At the end of 2006 we realised that the mound was not a disorganised accumulation of bones but a 10 square metre designed structure which was built up in stages," said Méry.

Skulls lay parallel to each other and ribs were laid in sets together with artifacts like beads and tools.

No animal was deposited whole in the structure. Some body parts like the ribs, vertebrae or limbs are fewer in numbers which demonstrates intentional selection. Very little evidence of butchering was found on the bones.

The flesh, oil, hide and tusks of the dugong were long exploited in the region and the consumption of dugongs has been confirmed on many archaeological sites. The early occupation of Akab is dated by four radiocarbon dates ranging from 4748 BC to 3814 BC and its dugong bone mound is seen as a monument constructed to last.

According to Méry, the skulls were intended to be the focal point and the presence of many selected objects confirms this. Akab has no parallel site in the region and no site of this type is known for the Neolithic in other parts of the world.

The archaeology of the Arabian Peninsula has revealed very little on ancient beliefs and ritual practices preceding Islam. Two Bronze Age temples were discovered in Bahrain, ruins of the Dilmun civilisation of the third and second millennia BC.

In the Musandam Peninsula, no known vestiges of the Bronze Age exist. It is not until the Iron Age that religious practices related to snakes appear.

The dugong is also specifically present at Al Markh, a fourth-millennium settlement site in Bahrain. Dating back to the Bronze Age the sites of Umm An Nar, Tell Abraq, Shimal and Ra's Ghanadha in the UAE have all produced dugong bones in varying numbers.

On the Australian coast of the Torres Strait monuments, bones similar those at Akab do exist. However, they originate from a much later date, somewhere between the 14th and 20th century AD.

According to Sophie Méry, director of the French archaeological mission in the UAE and her colleague Vincent Charpentier, from the French National Institute of Archaeological Institute (INRAP), these Australian dugong bone mounds were mostly part of totemic ceremonial sites, known as kod sites. They were sacred sanctuaries usually reserved for men.

These constructions contained the bones of dugongs. Ornamental objects or tools were also buried there. The mounds are associated with hunting magic rituals.

Méry and Charpentier believe the dugong at Akab held the role attributed in the same period to the green turtle in Ra's Al Hamra in Oman, the subject of impressive deposits between 3700 and 3300 BC, where skulls were placed near the face of the dead, while the body was covered with elements of turtle carapace or pebbles in a formation imitating that of turtle eggs.


The coastal people of Akab and Ra's Al Hamra were separated by several hundreds of kilometres. However, it is known that they shared a number of elements in their material culture. Certain fishing clans had marine totems such as the shark, the marine turtle or the dugong.


"We believe that in Akab, the dugong was related to propitiatory rites. The similarity is such between the monument at Akab and the Australian dugong bone mounds, that we see it as highly probable link with fishing rites," said Méry.
Posted by Jan at 11:49 AM