What do you do with a Kumari when she stops being a Kumari... 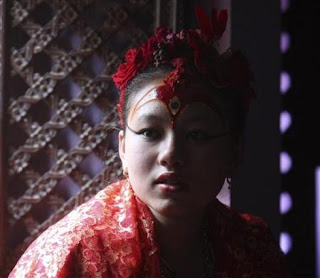 But - what do you do with a Kumari once she reaches puberty and ceases to be a Living Goddess? [Image: Chanira Bajracharya, 15, Kumari for the last 9 years]

Chanira Bajracharya, 15, has been the Kumari or "living goddess" of Patan, an ancient town south of Kathmandu, for nine years, blessing devotees at the temple and riding in decorated chariots 18 times a year during Hindu and Buddhist festivals.

Now, with her time as living goddess drawing to a close -- the young virgin deities retire on reaching puberty -- Bajracharya is contemplating a career in banking if she makes grades good enough to study commerce or accounting.

Last week she became the first living goddess ever to take the school leaving certificate examination, which was administered to her in her temple, which is housed in her home. . . .
Posted by Jan at 8:42 PM