I'm wrapping up this year's coverage of the 2010 City of Montreal Open Chess Championships.  Don McLean will have a report at Goddesschess in due course, perhaps by this weekend.  Here are some final items I wish to offer: 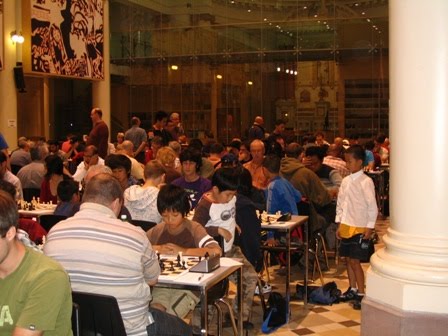 Another video - the background is rather noisy but listen closely to the conversation between Mr. Arthur Holler, who came to chess 'late in life' and Goddesschess' Don McLean behind the videocam. Memo to self: When I return to Montreal, be sure not to play chess with Mr. Holler, of whom I have no doubt would beat me around the block :))

Ooops! Bernard informs that is Arthur HOLLER (not Haller) and I have corrected the error at You Tube...

For a g-chess article - I am working on something but would/could just as easily C/P various notes and comments already appearing here and there... I find what I started a bit "dry" and need to liven it up a bit.

Also the time management thing... I also want to string together many clips to produce a good overall video presentation of the three day event... that may say more than I can in print... but will go for both...