From The Times of Malta
17 September, 2010
Juniors take centre-stage at Stella Maris College
[Excerpted]
[The Malta Junior Chess Championship] organised by the Malta Chess Federation (MCF), was held last week at Stella Maris College in Gżira where junior chess is on the up thanks to the efforts of College director Brother David, a keen chess enthusiast himself, and members of the MCF.

‘Eternal rivals’ Jamie Farrugia, Adrian Cutajar and Gabriel Farrugia were involved in a gruelling three-round title decider on the last day of the competition in the U-12 category.

At the end, Jamie Farrugia’s cool nerves won her the day as she beat her rivals in time-troubled Blitz games to win the U-12 title. Gabriel Farrugia was second ahead of Cutajar.

Women's World Blitz Chess Championship - Moscow (through September 18, 2010)
I found at the French website europe-echecs.com a button to do a Google translation to English, since my French is limited to strange verbs, the months of the year and numbers through twenty.  So much for four years of French in school.  Report by Gérard Demuydt, 17 September, 2010.  There are many very nice photographs of the players.  This one cracks me up - it looks like Irina Krush is catching 40 winks... 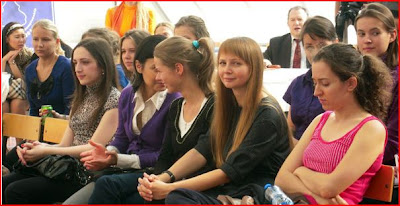 List of the players in the final - some qualified by means other than playing the last couple of days:

The GM who never sleeps, Susan Polgar, has a current report at her chess blog at the conclusion of the first day's play of the final.  As per usual she is on top of things.

GM Kateryna Lahno of Ukraine is in first place with a one point lead over GM Antoaneta Stefanova of Bulgaria.  An upset is potentially brewing in that GM Alexandra Kosteniuk, whom many thought would take this crown, is back in 6th place with 8.0, one point behind GM Koneru Humpy of India who has 9.0.  IM Irina Krush who finished the semi-final in strong first place is also back in the pack, in 10th with 7.0.  But there is a lot of blitz left to play tomorrow.  I'm not a fan of blitz, it obviously degrades the quality of chess play, but it demands a certain skill set and has its own fan base.  Yes, I'm sure chess dudes all around the world are watching the play for the love of blitz chess, and not because it so happens this is a gathering of some extremely lovely ladies.
Posted by Jan at 1:38 PM