The story of the Chess Cinderella continues!  Thanks to Susan Polgar, SPICE and Texas Tech for giving girls like Dyhemia the opportunity to win a college education.

From The Los Angeles Times

By Maria L. La Ganga, Los Angeles Times
August 4, 2011
Reporting from East Palo Alto, Calif. -- Dyhemia Young left for Lubbock, Texas, with a black eye — compliments of a girl at her East Palo Alto group home — and returned the proud recipient of a chess scholarship worth $40,000. 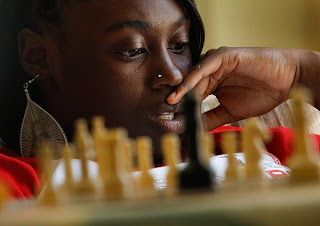 Along the way, the 15-year-old from the wrong side of San Francisco, who could not have made it to a prestigious chess tournament without the kindness of strangers, became a nationally rated player.
"My journey here, it was tough, because I had a lot of situations going on at home," she said tearfully after her first win, Game 3 of the six-game Susan Polgar Girls' Invitational.

The tournament takes place each year at Texas Tech University, drawing the top-rated girl from each state. Polgar, the first woman to earn the title of grandmaster, also issues two "wild card" invitations to gifted players who haven't traveled the pricey road of official competition.

Dyhemia, who has spent the last three years in and out of foster care, received one of the wild card bids. But when Adisa Banjoko, her chess mentor, called in June with the good news, Dyhemia had disappeared.

It took nearly a month and the help of a San Francisco police detective to locate Dyhemia; after a short stint in juvenile hall, she had ended up in the teen home.

Then there was the matter of money — nearly $3,000 was needed to send the high-school junior and a chaperone to the six-day event. After reading her story in The Times, generous donors sent thousands of dollars Dyhemia's way.

Problem solved? Not so fast.

The night before her flight to Texas, Dyhemia was sitting in the group home studying for her driver's license test with the help of a staff member. When the woman left the room, Dyhemia continued to drill herself. "Why don't you just shut up?" one of the other girls said before charging Dyhemia and punching her in the face.

"It all stemmed from jealousy," Sheila George, who heads the group home and accompanied Dyhemia to Texas, said in a phone interview from Lubbock. "Dyhemia came down here with all this in her soul and mind and heart. She had to get rid of all that junk."

When the rattled girl and her worried chaperone stepped off the plane in Texas, they were greeted by Polgar and a cheering group of chess players — Dyhemia's competitors and newfound friends.

As the tournament got underway, Dyhemia resigned her very first game — an attack of new-to-national-competition nerves. But Abdul Shakoor, a chess coach who had traveled to Lubbock to help his own daughter compete, took Dyhemia aside and showed her nuances of the game that, he said, "you can't really prepare for unless you actually play" at the national level.

"With me being a single father and being raised in foster care myself, [Dyhemia's] story inspired me," Shakoor said in a video posted on YouTube by Lisa Suhay, who runs an urban chess program in Virginia and has helped Dyhemia along the way.

"I felt like it was meant for my daughter, Diamond, to meet Dyhemia," Shakoor said. "It's bigger than chess."

Dyhemia battled well in her second game, and won the third — her only victory. As the tournament wound down, she was philosophical.

"Without my supporters, I wouldn't have been able to do it," she told Polgar. "I'm happy to say that I … had fun playing all my games. At least my opponents can say I was a challenge to them."

Not only did Dyhemia not win the championship, she didn't even get the congeniality prize. But at the awards ceremony Friday, she ended up with something better — a scholarship to Texas Tech.

When Polgar announced her name, the roomful of girls began to cheer. Dyhemia got up from her seat to accept the certificate, looking stunned. She cried. She smiled. She could think of only one thing to say: