From philly.com (The Philadelphia Inquirer) 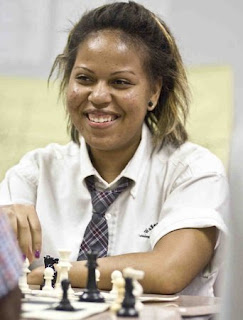 A TEXAS-SIZED CHEER to chess whiz Vanita Young, who just nabbed herself a $40,000 scholarship to Texas Tech University, following her brilliant performance at this week's Susan Polgar Girls' Invitational in Lubbock, Texas.

Readers of my column will recall that I wrote in June how Vanita, a rising senior at the Walter D. Palmer Charter School, near 6th and Poplar streets, beat out 600 other girls from Pennsylvania to represent the state at the annual invitational, named for Polgar, the world's first female chess grand master.

Up for grabs was $120,000 in scholarships to the three top winners of the five-day competition.
Posted by Jan at 9:02 PM