"Spectacular" Three-Cat Monolith Unearthed in Mexico
Giant carving may have been part of a monumental wall crawling with felines.
Ker Than
for National Geographic News
Published August 1, 2011 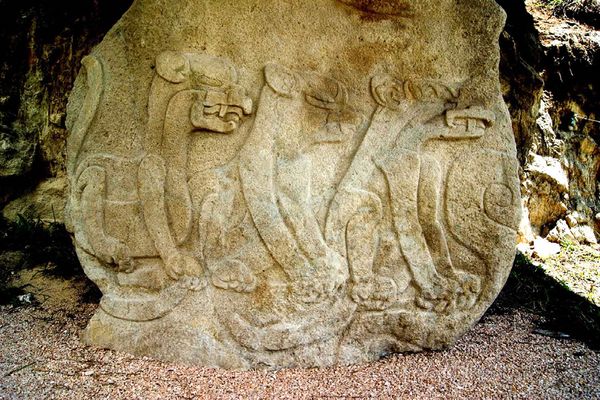 With a little help from archaeologists, three giant cats have slunk into view after spending thousands of years underground in central Mexico.


Carved in a vaguely Olmec style into a stone monolith, the seated jaguars—or possibly mountain lions—may have been part of a decorative hillside wall that was crawling with big-cat carvings, experts suggest.

The circa 700 B.C. carving, dubbed the "Triad of Felines" by archaeologists, was found about 60 miles (a hundred kilometers) south of Mexico City at Chalcatzingo, an archaeological site known to have had ties to the Olmec civilization.

Measuring about 5 feet (1.5 meters) tall and 3.6 feet (1.1 meters) wide, the carving was originally set within a hillside and was designed to be clearly visible from a village below, experts say.

The discovery is only the latest of about 40 large stone carvings found at Chalcatzingo since 1935—many of them depicting cats, said David Grove, an anthropologist at the University of Florida who conducted research at Chalcatzingo for 30 years beginning in the 1970s.

As an example of Olmec-style art, Grove added, "Triad of Felines" is "spectacular."

Ancient Billboard?
It took experts months to piece together and restore the 11 fragments that make up the cat-trio carving. At the same time, the scientists are assembling a theory in which the "Triad" is itself just one piece of a larger puzzle.

"Triad of Felines" may have been part of a collection of carvings that dotted the Chalcatzingo landscape, perhaps as spiritual "billboards" along a pilgrimage route, archaeologists suggest.

"One of our hypotheses is that, in the time from 800 to 500 B.C., there was a frieze along the entire Cerro Chalcatzingo," or "Chalcatzingo hill," project member Mario Cordova Tello, an archaeologist with Mexico's National Institute of Anthropology and History (INAH), said in a statement.

Traces of the Olmec
The Olmec occupied south-central Mexico from about 1500 to 400 B.C. and are thought by many to have had a large influence on other Mesoamerican civilizations, such as the Maya—and the people of Chalcatzingo. (Get the full story of the rise and fall of the Maya in National Geographic magazine.)

While not technically Olmec themselves, the inhabitants of Chalcatzingo likely traded with Olmec cities, said Grove, who wasn't involved in the latest discovery.

Olmec influences are visible in the stone artwork at the site—for example, in the use of Olmec symbols. But unlike the Olmec, who tended to carve three-dimensional statues, Chalcatzingo carvers tended to create raised images on flat surfaces, as in "Triad of Felines."


Flaming Eyebrows Hint at Supernatural Cats
Many other carvings of big cats—domestic cats arrived in North America only a few centuries ago—have been found at Chalcatzingo.

"Triad of Cats," though, is unique in depicting sitting animals, Grove said. The cats in the new carving also appear to have supernatural traits, such as flaming eyebrows and stylized mouths reminiscent of traditional Olmec masks.

Because they posed a significant threat to humans at the time, large felines such as jaguars were revered by many Mesoamerican cultures, Grove said. Their frequent occurrence in Olmec art suggests cats were important in Olmec religion and mythology, but their exact significance is still unknown.


"Something having to do with mythology is being expressed in these carvings ... but I am still trying to figure out exactly what it is," Grove said. "Not a lot is known about Olmec religion."
Posted by Jan at 8:05 PM