I was first introduced to Cafe Pi in December, 2001 by Mr. Don after we arrived back in Montreal from the Initiativ Gruppe Konigstein meeting of chess historians in Amsterdam.  I had a few days layover in Montreal before coming back home, and one of the places Don and I went was to Cafe Pi, which he had discovered a short time before himself. When I last visited Montreal (June, 2003), we once again visited Cafe Pi.  Both times we played a couple games of chess and had coffees.

The serious players all bunch up toward the windows and front door overlooking the busy street outside. I remember from my June, 2003 visit the windows were rolled back so that the space was wide open.  The cigarette smoke rolls out those opened windows thick and heavy!  Passersby on the street can stop and look in for a bit and watch the action.  There are always kibbitzers at those front tables, but there are some at the back tables too.  Mr. Don and I sat toward the back of the long, narrow space, where doors for the restrooms are located and a back door, open and beckoning people into the darkness of the back yard -- I always have wondered what the heck is out there???  During one visit in 2003 we attracted a kibbitzer of our own and had a great time talking with him -- not exactly conducive to playing good chess but who am I kidding?  I'm no player but I have dreams about becoming world champion (not kidding, I really do dream about that).

One thing - I haven't been there since they painted the walls that bright red!  When I was last there, the walls were white.  I don't know I could stand the red for too long - I'm aggressive enough as it is, darlings, thank you very much! 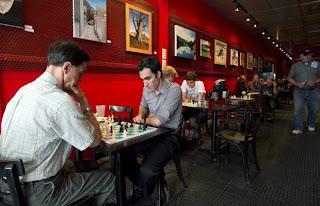 Montreal has a long history of chess cafés, but none of them ever managed to stay in business for very long. So when Arpad Kiss decided to name his new café after the most famous constant in mathematics, he had no idea that it would live up to its name and become such a fixture within the community.

Kiss noted that he came up with the idea for "Pi" because "it is a mathematical symbol and chess is a logical game. Pi is also an irrational number so it's mysterious and inconclusive. It combines logic and art."

Now celebrating its 10th anniversary, Café Pi is more popular than ever and remains one of the most unique destinations on The Main.

From the moment you walk in the door it's evident that this is no ordinary coffee shop. Countless chessboards sit on the surface of practically every table, the squares occupied by black and white pieces that seem as if they can hardly wait for two people to sit down and take them to war. Near the back, men (the clientele is mostly male) sit alone, quietly studying strategy books or solving intricate chess problems. From out of nowhere onlookers gather around particularly intense battles and then disperse just as quickly to get back to their own games.

Kiss attributes the success of Café Pi to a combination of three things, "Apart from being a place where people can come and play chess, we're also an art gallery and a fair trade-coffee shop" he said.
Indeed, local artwork covers practically every wall. A different artist is featured every month and the café does not charge a commission on any sales.

"It's nice to help artists get a start on their careers," said Vanessa Kiss, the café's artistic director, as she spoke to local photographer Stephane Fauliau near the front window.

"I was asking some friends where I could exhibit my work and they recommended this place," said Fauliau. "I called this morning and Vanessa told me to just drop by. They make the whole process very easy," he added.

Meanwhile, Jean-François Martinez sat alone at a table near the centre of the café engrossed in a popular chess magazine. "I come two or three times a week," he said, "mostly to play Blitz."

In Blitz games, each player has only five minutes to make all of his or her moves. Café Pi is well know for its Blitz tournaments, which are held on the first Sunday of every month.

The café also sponsors events alongside famous chess players. For example, on Sept. 6, Romanian grandmaster Alina L'Ami was on hand to conduct a simultaneous exhibition, i.e. she played multiple games at the same time.

Both the Blitz tournaments and the simultaneous exhibitions are extremely popular. "It's proof that there's a market for a chess café. There are enough people playing chess in Montreal to make these events possible," said Kiss

You don't need to be an expert to play in any of the tournaments, and even if you're a beginner, it's easy to just walk through the doors and strike up a random game.
Café Pi's website emphasizes that chess is, "one of the few games in which luck is not a factor - and neither is race, religion, age, and social class. In an individualistic world where the loneliness of people is becoming more widespread, chess brings individuals closer together."

Acutely aware that many people choose to play the game on a computer rather than face to face, Kiss takes the unifying role of chess very seriously. According to Kiss, the whole experience of playing chess is equally as important as what's happening on the board. "You have the touch, you have the feeling, and you have the emotion of the person sitting across from you that you can never have when you sit in front of a computer screen. Computers take the romance out of chess," he explained. A customer sitting at the next table promptly concurred. "Chess," he said, "C'est un amour."

© Copyright (c) The Montreal Gazette
Posted by Jan at 7:04 PM