This has absolutely nothing to do with chess, except in a tangental way.  Years ago, when we all had a lot more energy, with some help from Mr. Don I put together a chess spoof called The International Chessoid. It still makes me chuckle when I think of it. Unfortunately I deleted it all when I junked my very first computer - a Gateway desktop - more than 10 years ago. I was able to locate some stuff on The Way Back Machine because I happened to remember the old urls that I had assigned to TIC, as we called it (of course, it was a take-off and pun on TWIC -- The Week in Chess). But lots of parts were lost forever, including many of the photographs I used as parts of our spoofs.

In our TIC Dead Ringers, I would find a photo of a chessplayer and then match him or her with an historical figure or actor/actress or otherwise recognizable personality. I had a lot of fun with that! I remember I matched a photo of Alexei Shirov from when he was very young and very trim and very very handsome, with a photo of a bust of Alexander the Great. It was one of my more successful match-ups!

So, when I was watching another new show a few days ago, Prime Suspect, Maria Bello, the actress and main character of the show, appears on the screen and as I'm watching her I kept thinking OHMYGODDESS, THAT'S 'SIS! I was struck by the resemblance - facially, body type, even how she moves - the nuances of how she holds her head and hands, for instance. So, I hunted around for a photograph of 'Sis to compare to the actress Maria Bello dressed as her character in the show. Now I've got plenty of photographs of 'Sis, but none had exactly the right angle of face, lighting, hat, no sunglasses - well, you get the picture. This was the best I can do: 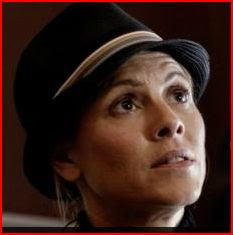 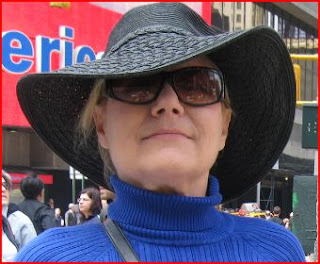 I think I convinced 'Sis that she and Maria Bello were separated at birth...  'Sis sent me a few photographs taken by Michelle recently.  I really want Michelle to take some photographs of me, maybe she can make me look in a photograph the way I think I look.  LOL! 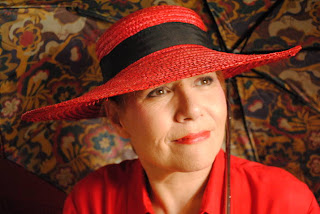 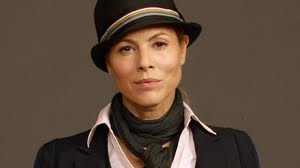 Which one is Maria Bello, and which one is Georgia a/k/a Isis?  Are you sure?
Posted by Jan at 6:13 PM