A woman ruler's skeleton—her head mysteriously placed between two bowls—is one of two royal burials recently found at the Maya ruins of Nakum in Guatemala.

The roughly 2,000-year-old tomb was found underneath another, 1,300-year-old tomb filled with treasures such as jade gorgets—normally used to protect the throat—beads, and ceremonial knives.

The upper tomb's corpse had been badly destroyed by rodents within the last few centuries, but the body was clearly that of another Maya ruler—perhaps another female, based on the small size of a ring found in that tomb.

The royal burials are the first discovered in Nakum, once a densely packed Maya center. Study co-author Wiesław Koszkul and colleagues have been investigating Nakum's surroundings, known as the Cultural Triangle, for decades.

"We think this structure was something like a mausoleum for the royal lineage for at least 400 years," said Koszkul, of the Jagiellonian University Institute of Archaeology in Krakow, Poland.

The Maya royal-tomb discoveries are described in the September issue of the journal Antiquity. 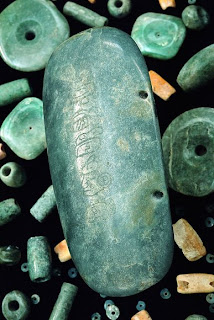 This jade pectoral, or gorget, was worn as part of a larger necklace across the chest of the ruler buried in the upper tomb.

The glyphs on the gorget are a partial mystery: Simon Martin of the University of Pennsylvania translated the name of the person as Ixim Chan, or "Maize God-Snake." But the jade piece also contains the word "Yaxha," the name of a city 10.5 miles (17 kilometers) south of Nakum.

"We don't know how the pectoral reached Nakum. Maybe one king of Nakum brought the pectoral from Yaxha, or there is the possibility that Nakum was ruled from Yaxha," Koszkul said.

The style of the glyphs is 300 years older than the tomb itself, raising the possibility that the pectoral was kept as a family heirloom for three centuries, he added. [According to the tentative dating of the second, later tomb, that means the pectoral would have been dated to around the time of the older tomb beneath it.  And so why do these dudes think this is NOT a family jewel passed down from female ruler to female ruler?  Too advant garde a thought, perhaps?]