Well, okay.  LOL!  This is also a book review at Minerva online: 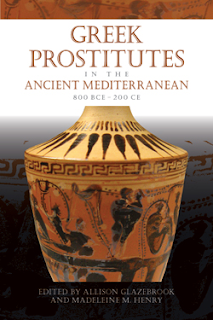 If, on finishing Jenifer Neils' Women in the Ancient World (reviewed left), you wanted to study in greater depth one of the more taboo aspects of feminine life, what is commonly referred to as 'the oldest profession in the world', then Greek Prostitutes in the Ancient Mediterranean 800 BCE – 200 CE provides the ideal scholarly assessment of the sex workers of Ancient Greece.

Glazebrook and Henry have edited contributions from 11 academics (including themselves) on this subject, and the 10 essays within this book, along with appropriate referencing glossary and indices, are very much aimed at those studying the Classical world at degree or higher level.

This is not to say, though, that the book is unapproachable or unengaging, quite the contrary in fact, as it covers such fascinating subject matter. On the other hand, this is not to say it is a vicarious peepshow into ancient sexual practices.

Much of the book focuses on the importance of Ancient Greek prostitutes to society. Among the ideas discussed are the socio-political power that prostitutes came to wield and how this sat with the lay (for want of a better term) community, the social status of women, civic endorsement of the profession and a philological study of the language associated with sex.

Architectural and archaeological evidence is also examined, with particular reference to the brothels on Delos. Coupled with liberal citations of ancient writings and fragments this makes for a pleasingly multidisciplinary approach to the subject.

Greek vase painting is a great resource for this type of study and Nancy Sorkin Rabinowitz's chapter, 'Sex for Sale?', analyses the representations of women seen (predominantly) on drinking vessels. By drawing attention to body language, rendering, attributes, and how these relate to written accounts, Rabinowitz explains that previous interpretations of rites of passage, courtship scenes, companionship and love scenes, may have been erroneous.

Many of the examples cited throughout this book create small vignettes of life in Ancient Greece and show how prostitution was fundamentally and vitally linked to many aspects of the social and economic position of the city-states.

What can be learnt from the prostitutes of Ancient Greece is evidently far more than might be expected and in many instances quite surprising – one good example of this is the madam who wrote out the rules of her brothel in 237 stanzas of high oratorical language.

Overall this highly engaging book demonstrates the need to use all the available ancient resources to build up an accurate cultural picture of the times.

As Glazebrook and Henry acknowledge, the academic study of the oldest profession is far more acceptable today than it once was.