I don't remember how long ago it was that Don McLean of Goddesschess adopted as one of his "names" Pi a/k/a Pimander; he equated it with a dragon (not the Pi from the book "The Book of Pi," who definitely was not a dragon).  Until the Harry Potter movies came out, the only dragon I ever was really familiar with was Puff, the Magic Dragon, from the old song by Peter, Paul and Mary.  Those lyrics are so sad, actually...

From time to time Pimander would make an appearance in our correspondence.  Some years back, perhap 7 years? ago -- I met a friend for lunch at the Tea Room at Watt's in Milwaukee.  Watt's has the most exquisite china, crystal, silverware and all things tableware-related.  I've spent hours at Watt's exploring its displays and oohing and aahing over the beautiful items there.  On the second floor, opposite the small Tea Room, is a gift shop.  That particular day, after lunch, my friend and I wandered into the gift shop and I found the most equisitely crafted silver-colored dragon, cast in pewter.  I instantly thought of Don, and how much he would love it.  His birthday was coming up, I recall, but the cost was more than I could afford, and so I reluctantly put the dragon back down, and slowly walked away.  I always regretted not buying that dragon for Mr. Don.  I remember I visited Watt's a few weeks later and went straight to the table where the pewter dragon had been, but it was gone -- sold, probably.  Watt's gift store often stocks one-of-a-kind items.  From that day on, I had my eye out for another dragon.  Alas, I did not find another one within my price range that held a candle to that Watt's dragon.  I should have bought it for him then.  But I didn't.

But when I was cutting up the limbs that came down in my backyard some weeks ago during a fierce wind storm, I ended up with this piece, which I kept, because it reminds me so much of a dragon's head and neck.  I call it, fittingly, Dead Dragon: 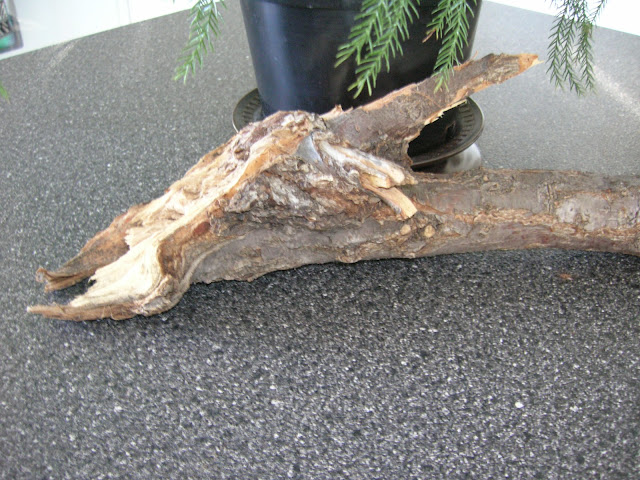 Dead Dragon is stationed on the peninsula between my kitchen and dining area, hanging out underneath my Norfolk Pine.  Unfortunately, he lost part of his ear/horn on the left when I tried to "operate" on him one day outside -- I tried to put an angle cut into his neck area instead of the straight-on cut I did when I first cut him off the large limb that crashed down from one of my trees during that storm.  Alas, the ear/horn broke off, and so he doesn't look as much like a dragon as he did before.  I also was not successful in making that angle cut I wanted to create; instead, you can now see a cut mark where I partially sawed through with my hand-held muscle-powered saw, but ran out of steam trying to cut through the raw wood.

Alas, poor dead dragon lost part of his face during the storm, probably why he died.  But one of his eyes is still cleary visible... 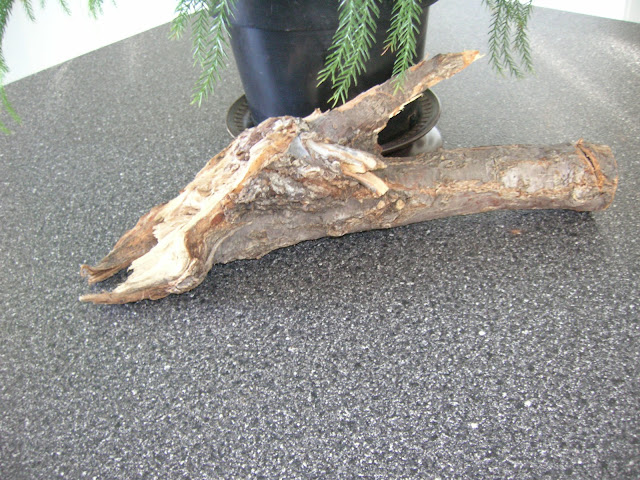 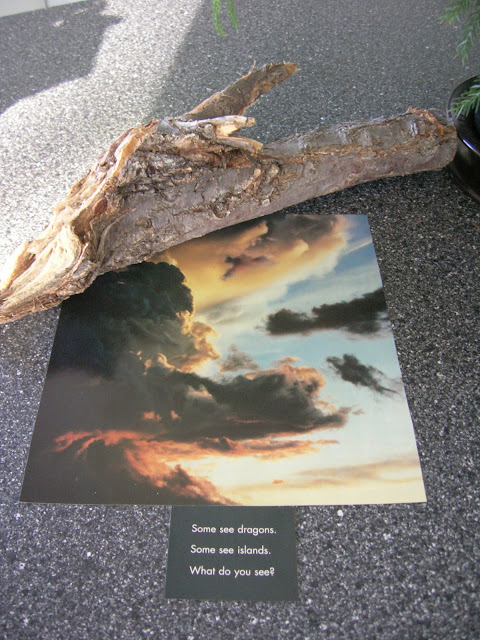 Yesterday, when I was cleaning out some old frames for re-use, I came across this ad that I'd clipped years before from a decorating magazine.  It was an ad from a window company and showed this spectacular photographs of storm clouds.  I also saved and clipped the words that accompanied the ad:

Some see dragons.
Some see islands.
What do you see?

Well, of course, I saw two dragons.  A smaller one that reminds me very much of my Dead Dragon of wood, and a much larger one.  I wonder, can you see them? 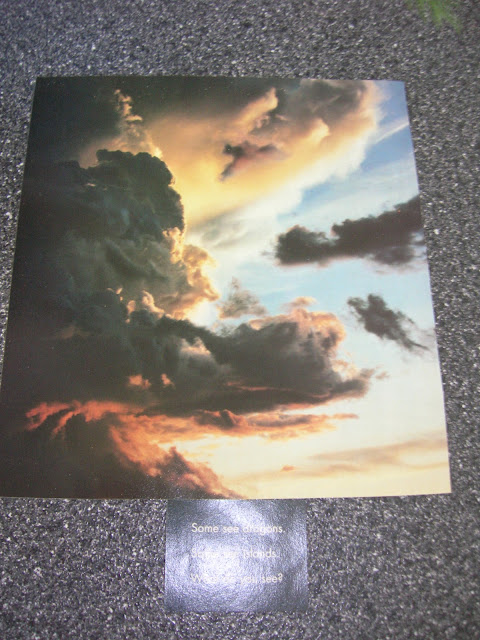 I have to add that Dead Dragon was found some weeks before Mr. Don's death on October 12, 2012.  So this isn't a morbid fascination.  Or, maybe it is.  Just one of those things?  I've no idea.  But tonight I came acoss this, and got a chuckle out of it.  I'd never heard of Dragon Hill although of course I have featured the Uffington Horse in this blog in the past.  Check it out:

Labels: Dragon, St. George and the Dragon, year of the dragon