Pairings for the first round of the knock-out are up at FIDE.  There are two games, plus an extra day before the start of the next round for tie-break matches: 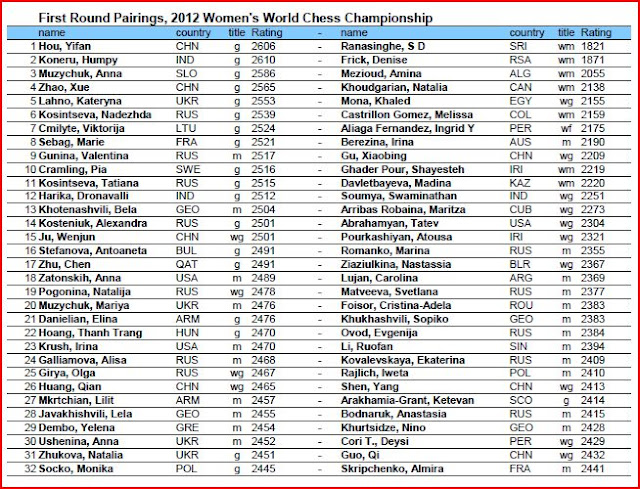 The Canadian women's champion (2012 Goddesschess Canadian Women's CC/Zonal), WIM Natalia Khoudgarian, is a sentimental favorite, but she drew an unfortunate pairing against one of the strongest Chinese players, GM Zhou Xue, and she has the black pieces too.  Can a miracle happen?  Nah, probably not.  But I'm glad for her sake she had this opportunity and

It's an impressive female gathering:  19 GMs.  A few years back there were less than a dozen, so I guess this is progress.  Too bad the women's ELOs are not keeping pace with their male counterparts.  Still out-classed and out-gunned in the women's chess ghetto.  Sigh.

But I will be following.  Frankly, most male chessplayers bore me.  The women, on the other hand, present themselves as actual real people.  Amazing!

This is a premiere event for the ladies.  The total prize purse is $450,000.  I was very surprised to read that FIDE will NOT be taking its normal 20% cut of the ladies' prizes this event.  Wonder why not...  Scruples never stopped FIDE from doing whatever it wanted before.

However, checks for prize money will NOT be handed out at the championship.  Nope -- FIDE requires each player to submit bank account information, presumably so that the prize money can be wired at a later time.  This is just damn downright ridiculous.  Either FIDE has the prize money, in which case there is NO REASON TO PRESENT EACH PLAYER WITH A CERTIFIED CHECK FOR THEIR WINNINGS BEFORE they leave Kamsky Mansky.  And if FIDE does NOT have the prize money in hand, why would a player ever think she would be paid, and turn over her personal banking information to - well, I won't go there...

Here is the prize structure: