Women in the Ancient World 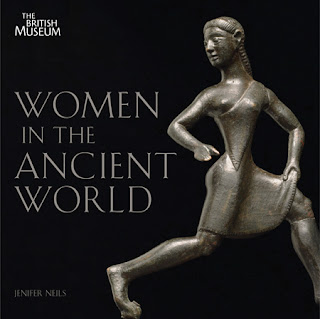 Jenifer Neils has taught Classical Art and Archaeology at Case Western Reserve University since 1980. She has also guest-curated two major international loan exhibitions, Goddess and Polis: The Panathenaic Festival in Ancient Athens and Coming of Age in Greece: Images of Childhood from the Classical Past.

Her latest book, a handsome volume, lavishly illustrated throughout with colour photographs of objects largely drawn from the collections of the British Museum, focuses on both the role and perception of women in the past.

Small details like a map of the ancient world, a list of goddesses across different cultures and a potted history of each in the opening chapter, make this a self-contained primer on the topic for those who incline towards the aesthetic.

Neils does broach the awkward truth that the vast majority of what we know of women in the ancient world is filtered through representations left to us by men, and makes some effort to navigate round this by touching on the clues that can be drawn from biological remains, for example, preserved bodies. This is, however, clearly not the raison d'être of this book, as more space is filled by beautiful images of well photographed objects than by CAT scans.

Having accepted that male-authored accounts concerning the female members of the population are heavily biased, the book unashamedly focuses on a visual celebration of women while at the same time placing them in a socio-historic context.

The cultures under scrutiny are Ancient Greece, Rome, Egypt, and the Near East. But, by examining the subject thematically, rather than geographically, Neils allows for interesting comparisons to be drawn between the different cultures, for instance views and laws concerning the legal rights of women and approaches to marriage.

This book ambitiously covers a vast period, stretching from 4000 BC to AD 600 and involving a range of religions and cultures – particularly from the Ancient Near East. But the chapter headings: 'Female Stereotypes', 'Mothers and Mourners', 'Working Women', 'The Body Beautiful', 'Women and Religion' and 'Royal Women' allow these introductory studies to be presented in accessible portions.

The chapters are peppered throughout with comparative and supporting accounts, from myths and old textual sources, which add to our understanding of the imagery on the objects (eg. black figure pots). A few surprising examples of biased ancient thought include the fact that Aristotle thought women were no more than mutilated men.

At its close Neils concedes once more that most of what we know about women in the ancient world is seen through male eyes, but as the remit of her book is to show how art celebrates the female form, it succeeds in being an engaging, informative and beautifully presented book.
********************************************************
Sounds like a good read.  I would love to see China and other far-eastern societies added, though, like India.  They are just as old as civilizations around the Mediterranean.  Why do we continue using such a narrow focus when dealing with such important themes -- like no people existed beyond these certain geographic confines?  The ancients certainly knew better!  There was some kind of contact and quite possibly trade going on between east-west from the early pharonic age, and certainly "westerners" were emigrating and settling in the east (in and around the Tarim Basin, for instance) by around 2500 BCE.
Posted by Jan at 6:51 PM

Labels: Women in the Ancient World