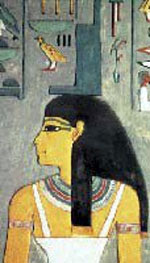 Her name is Isis, a Greek name for the ancient Egyptian Goddess, Aset (Auset), whose name literally means "throne."
Notice the shape of the "crown" upon Isis' head. It is a depiction of an Egyptian throne. It was, literally, upon the Goddess Aset that the Pharaohs of ancient Egypt sat, it was from that Goddess the Pharaohs derived their authority to rule. The Pharaoh - the "King" - sat upon the Goddess, who was the personification of the throne. Without the Goddess Isis, the King was powerless, for he lost his throne.

The depiction of Aset/Isis as a "throne" dates back to at least 3500 BCE (pre-dynastic) in Egyptian iconography. She was the mate of Osiris (Greek name), which in ancient Egyptian was variously Asar, Aser, Ausar, Wesir, or Ausare. That name "Wesir" sounds suspiciously like the much later title of "Vizier," who was the "King's" 'right-hand man,' the chess piece that later became the Bishop in western Chess.

What pieces today are placed on either side of the "King" and "Queen?" The Bishops - whose role in Medieval and Rennaisance European courts was advisor to the ruler and who, in many instances, wielded enormous power and influence despite their "godly" role as a representative of a higher power. De facto - the Vizier of old. Could Goddess Aset/Isis have been the original "King," She being the throne upon which the ruler sat - actually, the physical embodiment of the throne? And was God Asar/Wesir - Osiris - the original Vizier, who later became the "Bishop?"

Think about the tale of the relationship between Aset and Asar. Asar was killed by his jealous half-brother and cut into 14 parts, which he then scattered throughout the width and breadth of Egypt and the ancient Middle East. Isis found and reassembled 13 of the 14 pieces, but she could not find Asar's penis. And so by magic she conjured the 14th piece and thus restored Wesir/Osiris to his human form, and by magic she brought Asar back to life, but only as a God who lives in the Underworld, the King of the Dead. Asar/Wesir/Osiris was in a subsidary role, dependent upon Aset/Isis for his power, indeed, for his life.

Remember what the ancient lore teaches us. Remember the origin of "throne." We call a chess piece the "King" today, but that piece, representing the supreme throne, was originally a Goddess. Yes, to be sure, the female role of supreme throne was taken over by males in later history, but an echo of the Goddess remains down to this very day in the rules of chess; for just like the God Asar/Osiris, that piece that became the King owes His very life and existence to Aset/Isis, and as a sort of "divine" reminder, is thus severely restricted in his movements and power.