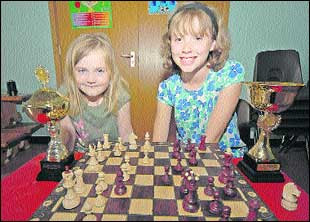 I saw this in the news just a few moments ago and just had to publish it here:
From the online edition of the Ely Standard
Queens of the chess board
09 August 2007
mailto:webdesk@herts24.co.uk

CHELSEA Ward and Sierra Humbert, pupils at the Rackham Primary School in Witchford, both enjoyed success whilst competing in the finals of the United Kingdom Individual Chess Tournament. Chelsea finished equal first in the under-seven section, and Sierra grabbed the prize in the under-11s.Both girls will go on to play in their respective age groups in the grand Terrafinal at Leamington Spa, Warwickshire.
(Photograph: Chelsea is on the left, Sierra on the right).
Posted by Jan at 8:34 PM